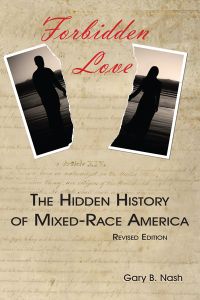 Forbidden Love The Hidden History of Mixed-Race America (University of California, 2010) by Gary B. Nash
Fair use image

In the following article, Dr. Gary B. Nash, Director, National Center for History in the Schools and Professor Emeritus of History at the University of California, Los Angeles, describes his new book, Forbidden Love: The Hidden History of Mixed-Race America.  His book provides a counter narrative to widely held belief that white supremacy ideals throughout most of the nation’s history prevented or at least made exceedingly rare beliefs in racial equality and the virtue of a biracial or multiracial United States.

For some years I have been writing and lecturing about the phenomenal change in American attitudes and behavior regarding “crossing the color line.”  My first stab at this was in my presidential address to the Organization of American Historians in 1995 (published in the Journal of American History as “The Hidden History of Mixed Race America.”  Pursuing this much further, my Forbidden Love: The Secret History of Mixed-Race America was published by Henry Holt in 1999.  I have now expanded and revised this book, just published by the National Center for History in the Schools as Forbidden Love: The Hidden History of Mixed-Race America.

Here is the kernel of the book in two sentences.  1) For three plus centuries American people have built walls to keep people of different so-called “races” apart, and now, in the last half-century, Americans have been tearing those walls down. 2) That over the long, dreary generations of trying to enforce racial separation many Americans found their way over, around, and beneath the racial walls—intrepid boundary crossers defying insistent boundary patrollers.

Here are a few examples of those who fought against the tide of racialism:

In staid, mostly white colonial Connecticut, a man of “unmingled African extraction” fathered a boy with a white young woman. That boy, precocious from an early age, became the first black preacher in Congregational New England. He fought as a minuteman at Lexington, Massachusetts in April 1775 and marched through deep snow to Fort Ticonderoga later that year to participate in the American defeat of the British. Marrying a white woman, Lemuel Haynes preached for 57 years to white congregations in Connecticut, Vermont, and New York.  His obituary called him a “sanctified genius.”

Yankee-born and Yankee-bred, Eunice Richardson followed her husband south to Alabama just before the outbreak of the Civil War, but when her husband died fighting for the Confederate army, she returned to Massachusetts.  There she married William Smiley Connolly, a British-born sea captain of African descent from the Cayman Islands.  There she took up life with her son and daughter.

Like many Irish immigrants Michael Morris Healy headed south to the Georgia frontier, purchasing land and then slaves.  He took one of them, Eliza Clark, as his common-law wife.  Of mixed racial ancestry, Eliza and Michael, through twenty years of marriage, raised ten children.  One became the third president of Georgetown University; another the Catholic bishop of Portland, Maine; another the rector of Boston’s Catholic cathedral; one daughter became the superior of several convents in Canada and the U.S.;  the youngest became the first black captain of a U.S. Revenue Service ship.

All of these racial renegades acted in accord with what some nineteenth-century reformers regarded as the future of America. “A new compound more precious than any,” wrote Boston’s Ralph Waldo Emerson, the most widely read essayist of the antebellum period, “where the energy of the Irish, Germans, Swedes, Poles, & and Cossacks, & all the European tribes—of the Africans, of the Polynesians, will construct a new race as vigorous as the new Europe which came out of the smelting pot of the Dark Ages.”

Prominent abolitionist Wendell Phillips in 1853 spoke approvingly of “The United States of the United Races” and preached for years that the mixing of races was producing a new and vital genus americanus.  He foresaw “the melting of the Negro into the various races that congregate on the continent [in] gradual and harmonizing union, in honorable marriage. . . In my nationality there is but one idea—the harmonious and equal mingling of all races.  No nation ever became great which was born of one blood.”

This was the minority view of course.  For those who clung to the ideal of a new mixed-race America, the message of the white purists was bone-chilling.   Out of the spotlight, and out of the favor with the white majority, racial renegades did their best to build pockets of mixed-race life and conduct themselves as honorably as their situations permitted.  Sometimes this required leaving America altogether.  In other cases it meant a lifetime of anguish and an uncertain future for their children.

Many states were busy passing laws prohibiting intermarriage between any of the four groups of people that white legislators decided constituted separate races.  In time, thirty-six states passed such miscegenation laws.  Only two nations have prohibited interracial marriage: South Africa briefly during the apartheid years and Germany under the Third Reich for a dozen years.  In the United States, no national law prohibited interracial marriage but two thirds of the states did so, including most of the western states, where interracial marriage between Asian and European men and women was often prohibited, as well as black-white, Asian-Native American, white-Native American, or other variations of racial crossing.

In the early twentieth century the rush to criminalize interracial marriage and redefine degrees of black, white, Indian, and Asian blood reached its peak.  To racial purists, more precise laws addressing definitions of race by blood proportion were critically important because the courts could not keep separate what they could not categorize.  But confusion reigned when states moved from defining white as no less than seven-eights white, fifteen-sixteenths, white, or completely free of even one drop of “black blood.”  For example, if a brother and sister who lived in Kentucky and North Carolina, respectively, had the same great-grandparent who was black, the North Carolina brother would have been legally black and sent to a black school while his sister would have been legally white and enrolled at a white school.  The North Carolina brother would go to jail for marrying a white woman. The Kentucky sister could be jailed for marrying anyone other than a white man.   North Carolina’s one-eighth black blood law and Kentucky’s one-sixteenth black blood law made all the difference.

The apostles of racial purity, reaching their height as World War I plunged Europe in flames, were sure that children of mixed unions would degenerate to the “lower type”—sure in the knowledge that all humankind could be arranged on a scale of human “types” from the most advanced to the most inferior.  In The Passing of the Great Race, Madison Grant brought to a fever pitch the white fear that racial intermixing would destroy the intellectual and moral attainments of the white race. “Mongrelization” was the word that dominated discourse, and calls for eliminating whites with deficiencies in order to achieve racial purity swept the country. “The laws of nature,” Grant explained, “require the obliteration of the unfit, and human life is valuable only when it is of use to the community or race.”

It didn’t work.  But not until after World War II did most Americans slowly begin to recognize that racial categorizing was based on pseudo-scientific ruminations, that there is no scientific basis for biologically determined “races” that share essential mental, physical, or cultural characteristics.  Once an idea is lodged in the public mind, it is difficult to dislodge.  But slowly it happened. Today, young Americans, most of them at least, understand that the racial boxes into which people have been fit—and have fit themselves—lack any objective foundation, that “race” has been socially constructed and historically shaped rather than biologically determined.  We are still some ways from recognizing that the only race is the human race; but change has been dramatic.

The walls were tumbling down by 1967 when Georgia-born Peggy Rusk, the daughter of Dean Rusk, the nation’s Secretary of State, married Guy Smith, a black Air Force pilot, in the chapel of Stanford University.  Ebony magazine reported “a massive shock wave of comment” in the U.S. and overseas.  But Americans were changing their minds.  They were returning to what William Lloyd Garrison had maintained 136 years before: that “a union of the sexes is a matter of choice . . . To limit this choice to a particular family, neighborhood, or people is to impoverish and circumscribe human happiness.  . . The standard of matrimony is erected by affection and purity, and does not depend upon the height, or bulk, or color, or wealth, or poverty of individuals.  Water will seek its level; nature will have free course; and heart will answer to heart.”

Today, when I speak before K-12 teacher groups, I ask those who themselves, a family member, or close friend have crossed the color line in marriage or a lasting relationship to raise their hand.  Nearly every hand in the room goes up. This is an astounding change in a single generation.  A smile must be crossing the face of Salmon Rushdie, who in his Satanic Verses wagged his finger at British Muslims who were struggling with—and often railing against–mixed identities.  “[They] are of the opinion that intermingling with a different culture will inevitably weaken and ruin their own,” he said.  But for him, “Mélange, hotchpotch, a bit of this and a bit of that is how newness enters the world.  It is the great possibility that mass migration gives the world, and I have tried to embrace it.”  Satanic Verses, he concluded, “is for change-by-fusion, change-by-conjoining.  It is a love song to our mongrel selves.”

The revised edition of Forbidden Love: The Hidden History of
Mixed-Race America
can be ordered below.  Purchases made here will
support the work of the National Center for History in the Schools
(NCHS), which for twenty-three years has been building bridges between
K-12 history teachers and academic historians as well as
BlackPast.org.  To order please click on the link below:

The National Center for History in the Schools UCLA