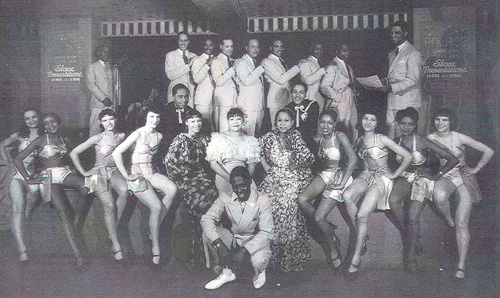 The hallmarks of the “Roaring ‘20s” are legendary in American history: dashing and daring men and women, illegal alcohol, flamboyant entertainers, and the music inspired by the post-war, prohibition era frenzy:  jazz.  While the hot spots in New York and Los Angeles, California generally garner the most attention, in 1924, San Diego’s Hotel Douglas opened its doors along with its own nightclub the Creole Palace, which became a venue that was destined to leave an indelible mark on the history of jazz and the local African American community.

For over 30 years, the Creole Palace was a popular, high energy cabaret that catered primarily to the African American population of San Diego.  The club, also known as the “Cotton Club of the West,” attracted prominent entertainers of the day such as Bessie Smith, Billie Holiday, and Count Basie.  It also provided a home and launching pad for their slightly less famous but no less important colleagues.  One of the most compelling artists to come from the west coast, Harold Land, began working at the Creole Palace just after he left high school.  Land was part of the band organized by Froebel Brigham, a gifted musician who worked at the Creole off and on for over 20 years.  Other important jazz artists who put in time at the Creole include Sonny Criss, Hampton Hawes, and Erroll Garner.

When black entrepreneurs Robert Lowe and George Ramsey built the Creole Palace, they didn’t intend for it to be simply a jazz club, and it wasn’t.  It was a cabaret with a light flavoring of burlesque.  In fact, by the 1930s, it was the most famous western cabaret outside of Los Angeles; it featured light- and dark-skinned beauties in variety shows which offered singing, dancing, and comedy.  It was also famous for its flashily-costumed show girls.  While the national burlesque industry was strictly segregated, the Creole Palace managed to offer much of the same entertainment to its customers of all races.  The Creole Palace, however, remained the center of African American entertainment in San Diego from 1924 until the post-World War II era.