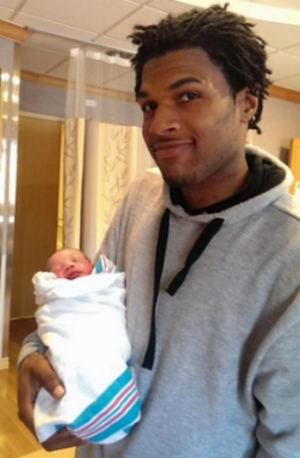 The shooting death of John Crawford III, a twenty-two-year-old African-American man by Beavercreek, Ohio police officer Sean Williams at a Walmart store in Beavercreek was another death that added to the national debate about the shooting deaths of unarmed black men promoted by the Black Lives Mattermovement. In this instance Crawford was holding a BB gun that he had asked to examine in Walmart.

John Crawford III was born on July 29, 1992, to Jordan Crawford Jr. and Tressa Sherrod in Cincinnati, Ohio.  Crawford’s parents never married and eventually ended their relationship. Crawford’s father relocated to Jackson, Tennessee where he worked in the Tennessee criminal justice system as a probation officer and criminal counselor.  John Crawford continued to live with his mother in Cincinnati but would regularly visit his father in Jackson.  Growing up, Crawford was in and out different public and private schools around Cincinnati. Despite the frequent change in schools, Crawford was still able to get his high school diploma at the age of 20.

By the time of his death in 2014, Crawford had a criminal record with minor offenses for marijuana possession and disorderly conduct. According to Hamilton County Court records, in 2013 he was charged with a felony for allegedly carrying a concealed weapon and for aggravated robbery. The grand jury declined to indict Crawford on felony charges.

Despite his criminal record, Crawford worked numerous odd jobs as a telemarketer through a temp agency and manual labor jobs. Crawford had two boys with his girlfriend, LeeCee Johnson, John Henry Crawford IV and Jayden.

On August 5, 2014, Crawford picked up an un-packed BB/pellet air rifle inside the Walmart Store sporting goods section in Beavercreek while he continued shopping.  Another customer in the store, Ronald Ritchie, called 911, claiming Crawford pointed the gun at other customers.  Two Beavercreek Police officers arrived at Walmart to investigate the incident.  They found Crawford in the store and one of the officers, Sean Williams shot Crawford who was taken to Dayton’s Valley Hospital where he was later pronounced dead. Another customer, Angela Williams, died of a heart attack while fleeing the shooting.

According to the official police account, Crawford didn’t respond to verbal commands to drop the BB gun/air rifle and lie on the floor.  Believing the air rifle was a regular real firearm, Officer Williams fired two shots into Crawford’s torso and arm. Store video camera footage shows Crawford was talking on his cell phone while holding the BB/Pellet air rifle when he was killed.  According to Crawford’s mother, the video shows the officers fired at Crawford immediately without verbal commands or giving Crawford the opportunity to drop the gun. Following the shooting, a grand jury decided not to indict any of the officers involved in the shooting.  In December 2014, the Crawford family filed a wrongful death lawsuit against Walmart and the police. As of 2017, Crawford case remains unresolved.