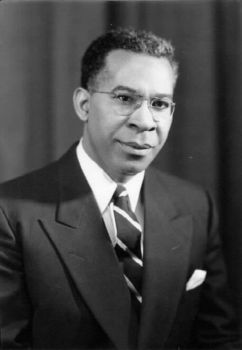 Born in Port-of-Spain, Trinidad, to a middle-class family, Oliver Cromwell Cox was one of nine children of Virginia Blake and William Raphael Cox.  Influenced by his father, who was determined that his children further their education, Oliver traveled to the United States at the age of 18 with the aim of becoming either a doctor or a lawyer.   In 1929 he completed a Bachelor of Science degree in Law from Northwestern University.  He had planned to return to Trinidad to live but was stricken with poliomyelitis and would walk with crutches for the rest of his life, which he spent in the United States.   Undeterred by his physical condition, he earned a M.A. in economics and a Ph.D. in sociology from the University of Chicago before holding professorships at Wiley College, the Tuskegee Institute, Lincoln University, and Wayne State University  where he amassed a prolific record of scholarship and a reputation as a  demanding and challenging pedagogue.

A largely forgotten scholar because of his alleged “Marxist orientation” and racism, Cox introduced world systems theory to the field of sociology at least a decade before it was utilized by more mainstream social scientists.  He wrote four books including Caste, Class, and Race (1948), The Foundations of Capitalism (1959), Capitalism and American Leadership (1962), and Race Relations: Elements and Social Dynamics (1976).  Like much of his previous work throughout his distinguished career, his final article shortly before his death entitled Jewish Self-interest in Black Pluralism (1974) created a wave of controversy.