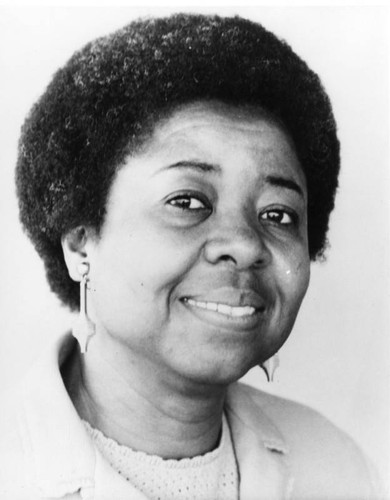 Odessa Cox is the principal founder of Los Angeles Southwest College (LASC), which serves a predominantly black and brown community in South Central Los Angeles, California. Born Odessa Brown on June 8, 1922, in Whatley, Alabama, she was a second-generation community activist. Her father, Chester Lee Brown, was a union organizer for the International Worker’s Order (IWO) and later for the Congress of Industrial Organizations (CIO). Along with Odessa’s mother, Alma Burroughs Brown, the couple imbued Odessa and her brothers, Lilton and Theodore, with a desire to help mankind and improve themselves through education.

Brown married Raymond Cox, a businessman in Bessemer, Alabama, in 1941, and two years later, the couple moved to Los Angeles. Odessa and Raymond became avid students at the local community college, and in 1945 opened Utopia Cleaners in Watts, California. For forty-eight years, they were in the dry cleaning business, while Odessa worked diligently as a member of the Parent Teacher Association (PTA) to push for better education for their daughters, Rita L. Cox-Long, Brenda C. Cox, and Sandra E. Cox, who eventually earned a Ph.D in social psychology. Brown also worked to improve the image of African Americans in California state textbooks. Eventually, these efforts led to a desire to establish a community college in South Central Los Angeles. Odessa also worked with her husband in the California Progressive Party’s campaign to hire blacks and Latinos for the first time at the Farmer’s and Merchant’s Bank and Safeway Stores in Watts. In 1957, she led the community effort to build Henry Clay Junior High School in Watts.

While fighting for LASC, Cox also became involved in the campaign to locate California State University, Dominguez Hills near South Central Los Angeles. The campus, which opened in Carson, California, just south of Watts and Compton, California, in 1960, was the first four-year institution to serve African Americans in the Watts area. Cox and her supporters defeated plans to build the campus in the wealthy area of Palos Verdes.

The 1965 “Watts Rebellion” was the incident that led the Los Angeles Board of Education to finally agree to open LASC. On July 11, 1967, at 3:30 A.M., Odessa Cox, Adele Canno, Dr. Agnes Moreland Jackson, and Sue Acosta met on site to witness the arrival of the first of thirteen bungalows that would temporarily house the college.

A lifelong Democrat, Cox organized the New Spirit Democratic Club and was a member of the Martin Luther King Democratic Club, as well as the California Democratic Council (CDC). In May 1977, Cox served as a delegate from the Los Angeles Chapter of World Peace Council to the World Assembly of Builders of Peace in Warsaw, Poland. She was selected due to her work in the American Association of Afro-American Relations. She also became chairperson of the United Front for Justice in South Africa.

Odessa Cox died on October 27, 2001, at the age of 79, in the family home in Los Angeles. She received many honors over her lifetime, and one in 2001 posthumously from the Los Angeles Southwest Community 21st Century Higher Education Alliance in cooperation with the Black Women’s Forum.