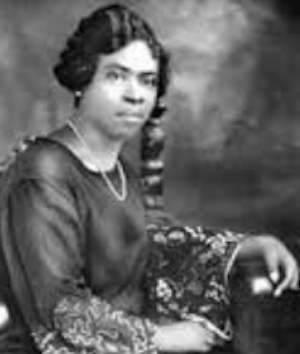 Minnie M. Cox, the first black female postmaster, was born 1869 in Lexington, Mississippi, to former slaves William and Mary Geddings. After attending school in Lexington and Indianola, Mississippi, Geddings graduated from Fisk University at the age of nineteen. After graduation, she married Wayne W. Cox, who was principal of the Indianola Colored School and the city’s first black alderman in 1888. The couple was politically active in the Republican Party and as a consequence, President Benjamin Harrison appointed Cox postmaster in Indianola in 1891.

As postmaster, Cox had a large salary of $1,100 a year, and her position carried the prestige of a presidential appointment. She was the first postmaster in that community to have a telephone installed in the office at her own expense so that local people could call to check if they had mail.

In 1892 President Grover Cleveland, a Democrat, chose Mrs. D.J Treadwell, a white woman, to replace Cox. On May 22, 1897, however, Cox was reappointed to the post by President William McKinley and then appointed for another term by President Theodore Roosevelt.

Despite her long tenure as postmaster, many local whites were angry that a black woman held the post. The white citizens of Indianola wanted to eliminate African Americans from all political positions, and they particularly wanted Cox removed as postmaster.

In the fall of 1902, James K. Vardaman, the white supremacist editor of the Greenwood Commonwealth, made Cox’s tenure as postmaster a political issue. Even before he was elected governor of Mississippi in 1904, he demanded that President Roosevelt fire Cox. Roosevelt refused. Meanwhile, the white townspeople of Indianola held meetings calling on Cox to resign on January 1, 1903, a full year before her commission as postmaster ended. She refused to step down prior the end of term, but she made it known that she would not be candidate for reappointment.

The situation grew tenser as local people began to threaten her and her family with violence. In response, Postal Inspector Charles Fitzgerald urged that Cox be protected by federal troops as she continued to discharge her duties. President Theodore Roosevelt refused to send troops, but he also refused to accept Cox’s resignation before her term ended. Instead, the president closed the Indianola post office on January 2, 1903, and declared it would remain closed until the white citizens of Indianola accepted Cox as postmaster. They did not, and the post office remained closed until Cox’s term expired on January 1, 1904. President Roosevelt appointed William Martin, a friend of Cox, as the new postmaster.

Meanwhile Cox and her husband fled Indianola on January 5, 1903 for their own safety. They returned in 1904, and Minnie and Wayne Cox founded the Delta Penny Savings Bank which attracted both black and white investors and depositors. The bank continued for twenty-four years until it failed on January 7, 1928. When her first husband died in 1925, Cox remarried and moved to Memphis, Tennessee, and later to Rockford, Illinois, with her second husband, George Key Hamilton. Minnie M. Cox died in 1933.