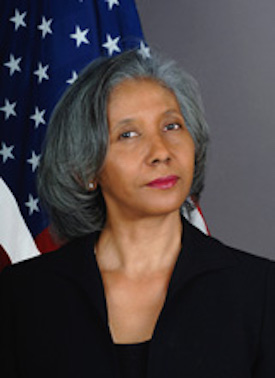 Cindy Lou Courville is an American diplomat and expert on Africa. Born in Opelousas, Louisiana, to Earnest and Mar Courville in 1954, she grew up attending segregated schools until the eighth grade when she was among the first groups of African American children who began to integrate the local schools.

Courville received a bachelor of arts and a master’s degree in political science from the University of Louisiana at Lafayette, and then enrolled at the University of Denver in Colorado where she received a master’s (1980) and doctorate (1988) from its Josef Korbel School of International Studies. While studying in Denver, Courville took an interest in the liberation struggles in Rhodesia (now Zimbabwe), drawing comparisons to the segregated South where she had grown up. This interest started her down the path of African scholarship and policy engagement.

After Denver, Dr. Courville pursued an academic career for ten years, first as a member of the political science faculty at Hanover College in Indiana, and then at Occidental College in Los Angeles, California. Her attempt at a tenured academic post at Occidental failed, and later she would refer back to that disappointment as a hidden blessing because she eventually found herself at the center of policy and decision-making on African issues.

In the late 1990s, Dr. Courville began working as a political-military analyst for the Defense Intelligence Agency (DIA) in Washington, DC From 1997 to 2001, she also served as policy staff director for Africa in the Directorate of Operations and later as deputy assistant defense intelligence officer for Africa policy in the office of the secretary of defense for Africa. In these roles, she coordinated U.S. military and security policy in East Africa and the Horn of Africa and helped develop policies on U.S.-Africa engagement.

In 2001 Dr. Courville moved to the White House, joining the National Security Council (NSC) and her former University of Denver classmate, Dr. Condoleezza Rice, who was President George W. Bush’s National Security Advisor. There Dr. Courville was senior intelligence officer in the office of the chief of staff, and then the director for African Affairs until 2004, when she was appointed special assistant to the president and senior director for African Affairs at the NSC. Her contributions in these roles included developing U.S.-Africa policy, representing the White House in its interactions with the Millennium Challenge Corporation, an independent U.S. foreign aid agency founded by an act of Congress in 2004.

In 2006 President Bush appointed Dr. Courville as the first U.S. ambassador (and the first ambassador from a non-African state) to the African Union (AU) in Addis Ababa, Ethiopia. In this role, Ambassador Courville led U.S. efforts to promote cooperation and engagement among the African states in areas of peacekeeping, conflict resolution, and economic, social, and political development issues.

Ambassador Courville left her post in 2008 and returned to private life, speaking at events, providing expertise on Africa, and returning to academia, including serving as a professor at the National Defense Intelligence College in Washington, DC. In June 2015, Ambassador Courville joined the private sector as CEO at the global professional services company, PMIC, Incorporated.