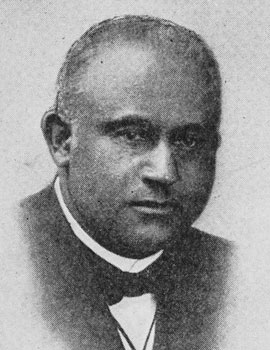 Joseph Seamon Cotter, Sr., the father of poet-playwright Joseph Seamon, Jr., distinguished himself as a playwright, poet, author, and educator. Cotter was born in Bardstown, Kentucky in 1861, but was reared in Louisville. He was one of the earliest African American playwrights to be published. His father, Michael J. Cotter, was of Scots-Irish ancestry, and his mother, Martha Vaughn, was an African American. Cotter, Sr. married Maria F. Cox, a teacher, on 22 July 1891. They had children Leonidas, Florence, Olivia, and Joseph Seamon Cotter, Jr.

Cotter, Sr. was essentially a self-educated man who learned to read at age three. He worked as a manual laborer until he was 24.  He then attended night school for ten months and subsequently worked as a teacher at Western (Kentucky) Colored School between 1893 and 1911. Cotter also taught in several private and public schools in Kentucky and in 1911 founded the Samuel Coleridge-Taylor School in Louisville where he held the post of principal until 1942.

Cotter’s most significant play, Caleb, the Degenerate: A Study of the Types, Customs, and Needs of the American Negro, was written in 1903.  The play dramatized Booker T. Washington’s philosophy of industrial education as a means of achieving race progress. Cotter also wrote Caesar Driftwood, a one-act comedy set the night before a wedding, and The Chastisement, a one-act play written in short staccato dialogue. Cotter also wrote six volumes of poetry and folk ballads.  Joseph Seamon Cotter, Sr., died in Louisville in 1949.