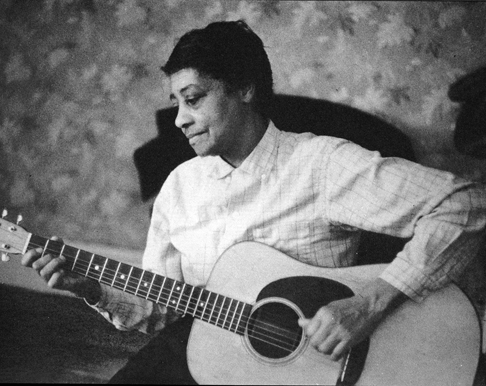 Elizabeth “Libba” Cotten, an American folk and blues musician, made her professional debut in 1959 at the age of 67. Discovered by the musically-renowned Seeger family in the 1950s, Cotten was soon recognized for her unique self-taught guitar and banjo picking style and her songs “Freight Train,” “Oh, Babe, It Ain’t No Lie” and “Shake Sugaree.”

Born in 1892 (though some sources state 1893 or 1895) near Chapel Hill, North Carolina to a musically inclined family, Elizabeth Nevills started singing and performing pre-blues, finger-picked music at a young age. Secretly borrowing her brother’s banjo, the left-handed Nevills taught herself to play the right-handed instrument by turning it upside down and playing the bass with her fingers and the treble with her thumb, inadvertently creating a unique picking style that was later referred to as “Cotten Picking.” She bought her first guitar when she was 11 years old and continued to employ her upside-down picking technique.

At the age of 15, Elizabeth Nevills married Frank Cotten and gave birth to their daughter Lillie at age 16. Soon busied by domestic work and a revived religious fervor, Cotten set aside the guitar and banjo for virtually the next 50 years. The Cottens lived in New York City until 1947, when she divorced Frank and relocated to Washington D.C., where she worked as nanny and domestic servant for Ruth Crawford-Seeger and legendary ethnomusicologist Charles Seeger.

Their son, Mike Seeger, conducted recordings in the 1950s that lead to the release of Cotten’s first album, “Folksongs and Instrumentals,” in 1958. The album featured “Freight Train” and other original songs from Cotten’s youth. In 1965, Smithsonian Folkways released a second album by Cotten, “Shake Sugaree.” Her third album, “When I’m Gone” was also released in 1965. Cotten’s fourth and final release, “Elizabeth Cotten Live,” won a Grammy Award in 1984 for “Best Ethnic or Traditional Folk Recording.”

In 1959, she debuted with Mike Seeger at Pennsylvania’s Swarthmore College. She performed at a variety of folk festivals from 1964-1980, including the Newport Folk Festival, the American Folk Festival, and the Washington Blues Festival. In 1978, she played New York City’s Carnegie Hall. At the age of 80, Cotten toured America and Europe with the blues musician Taj Mahal.