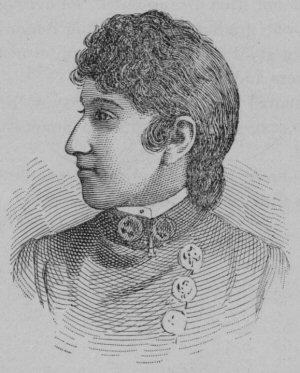 The date of birth for Julia Ringwood Coston, one of the first black women to edit a magazine, is unknown. We do know that she was named after Ringwood farm in Warrenton, Virginia, where she was born. While she was still an infant, Ringwood moved to Washington D.C. with her family and attended public schools there. She had almost completed school when her mother died and she was forced to withdraw.

In the spring of 1886, Ringwood married William Hilary Coston, a student at Yale University who eventually became a minister and writer. They had two children, a daughter, Julia R. in 1888, and a son, W.H. in 1890. The family settled in Cleveland, Ohio where William Coston was pastor of Saint Andrew’s Episcopal Church. William Coston was especially encouraging of Julia’s writing interests and gave her advice based on his experience as a writer.

In 1891, Julia Coston, realizing that white journals ignored black interests and themes, decided to create her own journal: Ringwood’s Afro-American Journal of Fashion. Concerned with the suffering and hopelessness of black women in the South, she believed that press editorials could be effective in protesting their inhumane treatment.  The twelve-page journal, which had a yearly subscription fee of $1.25, provided advice on homemaking, etiquette, and fashion.

Ringwood’s Afro-American Journal of Fashion carried illustrations of the latest Paris fashions along with articles, biographical compositions of outstanding black women and promising young ladies, instructive articles for women and their daughters, as well as love stories. At the time, it was the only fashion magazine for blacks in the world.

The journal received tremendous praise from its readers and other noted publications. In 1892, Rev. Theodore Holly, then living in Port-au-Prince, Haiti, wrote that Ringwood’s Afro-American Journal of Fashion was already the leading magazine in that nation while the Philadelphia Recorder declared the magazine a welcome addition to any home, white or black. Victoria Earle (later Matthews), a black New York society leader, wrote that the magazine was a major source for instruction and guidance in home organization.

Julia Coston strongly supported and encouraged women writers through her journal and allowed younger contributors to gain publication experience there.  She also believed these writers were good role models for the journal’s target audience.

For two years, from 1893 to 1895, Coston published a second journal: Ringwood’s Home Magazine. It was not as successful as her fashion magazine though, and she eventually stopped publishing it.

Julia Ringwood Coston’s death was not recorded, nor was her life documented after the year 1895.