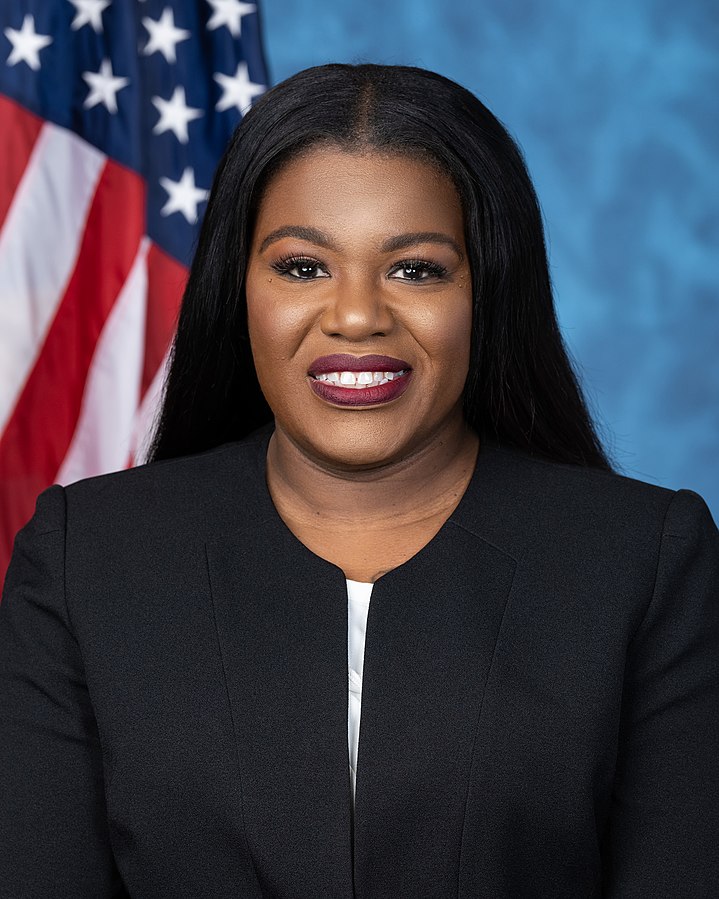 Cori Anika Bush is the first African America woman elected to represent Missouri’s 1st Congressional District in the U.S. House of Representatives. She is also a single parent, a registered nurse, a former pastor, an activist, and a community organizer.

Bush was born July 21, 1976 and raised in St. Louis, Missouri, the daughter of Errol S. Bush, an alderman and former mayor of Northwoods, a small city in St. Louis County and Barbara J. Bush a technical analyst. Bush has a brother, Perry and a sister, Kelli. She graduated from Cardinal Ritter College Prep High School in 1995 and attended Harris-Stowe State University for one year, 1995 to 1996. Bush also attended Lutheran School of Nursing from 2005 to 2008 where she received a diploma in Registered Nursing.

Bush began her career as a preschool teacher and eventually become the school’s assistant director. In 2011, she established the Kingdom Embassy International Church in St. Louis, Missouri serving as its pastor until 2014. Bush also worked as a registered nurse, at the SSM Health Saint Louis University Hospital from 2008 until 2011. In 2013, Bush became a Nursing Supervisor, at Hopewell Health Center until 2020. Since 2015 Bush has also served as Nonviolence 365 Ambassador for The King Center and the Co-Director of the Truth Telling Project.

Bush’s interest in politics began through her work with the Ferguson movement as a protester, clergy, medic, and victim of police assault. In 2016 that work led her to become a candidate for the U.S Senate but she was defeated in the Democratic primary in August. The following year she was elected the first vice-chairperson of the Missouri Democratic Party Progressive Caucus and was an organizer of the St. Louis protests known as “Expect Us.”

In 2018 Bush was a Democratic candidate for Missouri’s 1st Congressional District, however, she was once again defeated in the Democratic primary in August, 2018. Nevertheless, on August 4, 2020, ran again, defeating William Lacy Clay, Jr., the 10-term incumbent in the Democratic Primary. This was a major upset as Clay and his father, William Lacy Clay, Sr., had represented the district since 1969. Bush won in the general election on November 3, 2020 and assumed office on January 4, 2021.

Bush’s campaign was featured in the award-winning documentary Knock Down the House (2019) that followed her and three other Congress candidates, Amy Vilela, Paula Jean Swearingen, and Alexandria Ocasio-Cortez through their election journey to pull off the most stunning political upsets in recent American history. Bush has received many distinguished awards and honors including the 2018 “Community Activist” award from the Missouri Association of Black Ministers. She was honored as an “Unsung Human Rights Shero” by the St. Louis Coalition for Human Rights in 2017, in 2016 the Delux Magazine “Power 100” Award and named one of the “Top 50 Women of St. Louis” by Gazelle Magazine and honored as a recipient of the 2015 “Woman of Courage” Award from the Emmett Till Legacy Foundation. Bush has also been a radio host of Grounded on BlogTalkRadio, the Civics Chair for Better Family Life Incorporated, a member of the Ferguson’s Women’s Caucus, and the organizer of Michael Brown, Sr.’s Chosen for Change Foundation.

Bush lives in St. Louis, Missouri. She is a divorced mother of two children, son Zion and daughter, Angel.