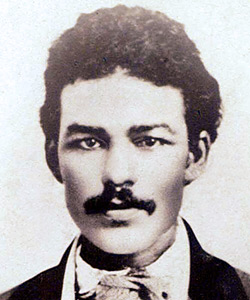 John Anthony Copeland Jr. was born free in Raleigh, North Carolina on August 15, 1834, to John Anthony Copeland Sr., a slave, and Delilah Evans, a free woman.  Copeland spent much of his early life in Ohio and attended Oberlin College.  While residing in Oberlin, Ohio, Copeland became an advocate for black rights and an abolitionist.  In 1858, he participated in assisting John Price, a runaway slave seeking his freedom.  This act became famous as the Oberlin-Wellington Rescue, where abolitionists boldly aided slaves in violation of the federal Fugitive Slave Law.

Once released from jail, Copeland joined John Brown’s group that planned to attack the federal arsenal at Harpers Ferry, Virginia (now West Virginia).  Copeland was recruited to join Brown’s group by Lewis Sheridan Leary.  He and Leary, along with three other African Americans, Osborne P. Anderson, Dangerfield Newby, and Shields Green took part in what they hoped would be Brown’s slave manumitting army.  Like Brown and the other followers, Copeland believed that if the group seized weapons at Harpers Ferry and then marched south, they would created a massive slave uprising that would free all of the nearly four million African Americans in bondage.

On October 16, 1859, John Anthony Copeland, along with the rest of Brown’s assemblage, raided Harpers Ferry, West Virginia.  The plan was to conquer the arsenal located in Harpers Ferry, however, they failed and were captured.  On October 26, 1859, the trial of the survivors of the raid began in Charleston Town, Virginia (now West Virginia).  Copeland and the others were convicted of murder and encouraging slave insurrection and sentenced to death.  Twenty-three year-old John Anthony Copeland Jr. was hanged on December 16, 1859.