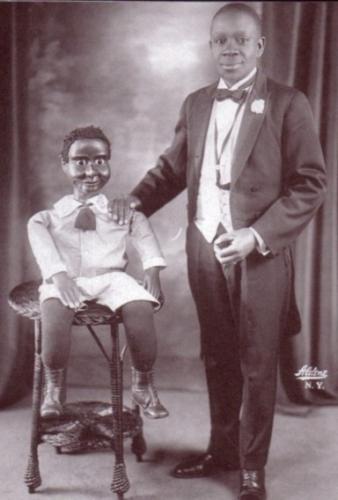 John W. Cooper was an African American ventriloquist, born in Brooklyn, New York in 1873.  After losing both of his parents at a very young age, Cooper received his education at Professor Dorsey’s Institute in Brooklyn.  There he developed into a budding entertainer and took a special interest in ventriloquism, a craft he learned from an unidentified white man whom he met at a Sheepshead Bay racetrack.

Cooper, who was also a singer, joined “The Southern Jubilee Singers.”  While touring with the group he also developed his ventriloquism act, writing and performing his own material before mostly white audiences.  “Fun in a Barber Shop” became one of his most famous acts.  Cooper portrayed six different puppet characters, each with his own voice performed by Cooper himself.

In 1902, when he was twenty-nine, Cooper had his first big break in ventriloquism while traveling with Richards and Pringles Minstrels.  In that year he was recognized by the Daily Nonpariel, a leading entertainment magazine, as the best ventriloquist of that era.    Cooper went on to create another act with a black ventriloquist puppet named Sam Jackson.  Cooper and Sam traveled all over the United States during the next two decades.  By the start of World War I he began performing at veteran hospitals, service clubs, and military camps.

Over his lifetime Cooper was a member of the Negro Actors Guild, Knights of Magic, the Colored Vaudeville Benevolent Association, and the International Brotherhood of Ventriloquists.  Cooper continued to perform and to create new acts for another twenty-five years.  He also taught his craft to Shari Lewis and other young ventriloquists who carried on his legacy.  Cooper retired in 1960 at the age of eight-seven after the death of his wife Juliana St. Bernard.  John W. Cooper died six years later in New York in 1966.