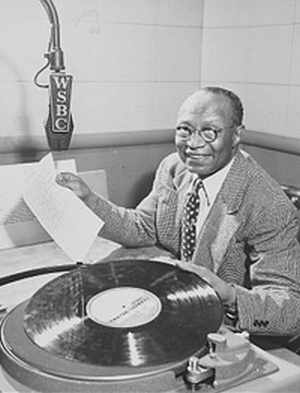 Jack L. Cooper is widely acknowledged as the first African American radio broadcaster. Cooper, born in Memphis, Tennessee on September 18, 1888, was the youngest of 10 children. He was raised in a poor, single-parent home, and, at the age of 10, quit school and moved to Cincinnati, Ohio to work at a racetrack. Aside from his work at the racetrack, Cooper worked a number of odd jobs as a teen and was a successful boxer, winning the Ohio Negro welterweight title in the late 1910s. Cooper began his entertainment career as a dancer and comic on the Theater Owners Booking Association, a popular African American vaudeville circuit in the 1920s and 1930s. Here he met his first wife, Estelle Mansfield (Madam Lamar) Cooper, and they created the Cooper and Lamar Music Company.

Cooper’s entry into radio was due not to his early career as an entertainer, but to his work as a journalist. While he toured with Madam Lamar Cooper, he wrote for black newspapers in Memphis and Indianapolis, Indiana. In 1924, this led to the position of assistant theater editor at the influential Chicago Defender in Chicago, Illinois. Cooper wrote a weekly column, “Coop’s Chatter,” and the newspaper selected him to help open up its new Washington, D.C. office in 1925. Later that year, the producer of a show on WCAP in Washington, D.C. hired Cooper to help write and perform comedy skits based on Negro dialect. The show, although successful, required Cooper to perform a sort of radio minstrel show aimed at white consumers where his role was to creatively mock African American language.

Because of these restraints, Cooper quit his job at WCAP and returned to Chicago with the goal of creating a radio program that would attract a black audience. Cooper developed an idea for a weekly variety show, but had no luck finding a station that would take his show. In 1929, Joseph Silverstein, owner of WSBC, a low-power station that catered mainly to Chicago’s large immigrant population, agreed to air Cooper’s The All-Negro Hour. At the start, The All-Negro Hour focused on live music and vaudeville comedy, but gradually incorporated the comedy serials—humorous skits that followed the same characters each week—that were popular in the era.

In the coming years, Cooper developed into a radio mogul. Cooper popularized playing records on the radio. He built his own radio studio and created a radio advertising agency which profited from the advertisements of black and white entrepreneurs as well as local entertainers who purchased airtime. By the late 1940s, Cooper produced over 40 hours of radio each week on four radio stations. His programming also diversified. Cooper produced religious shows such as Know Your Bible and public affairs shows in coordination with both the Chicago Defender and the Pittsburgh Courier.

At his peak in the late 1940s, Cooper commanded the largest black radio operation in America and earned over $200,000 per year. His success laid the groundwork for generations of black radio personalities. Jack L. Cooper died on January 12, 1970 in Chicago. In 2012, Cooper was posthumously inducted into the Radio Hall of Fame.