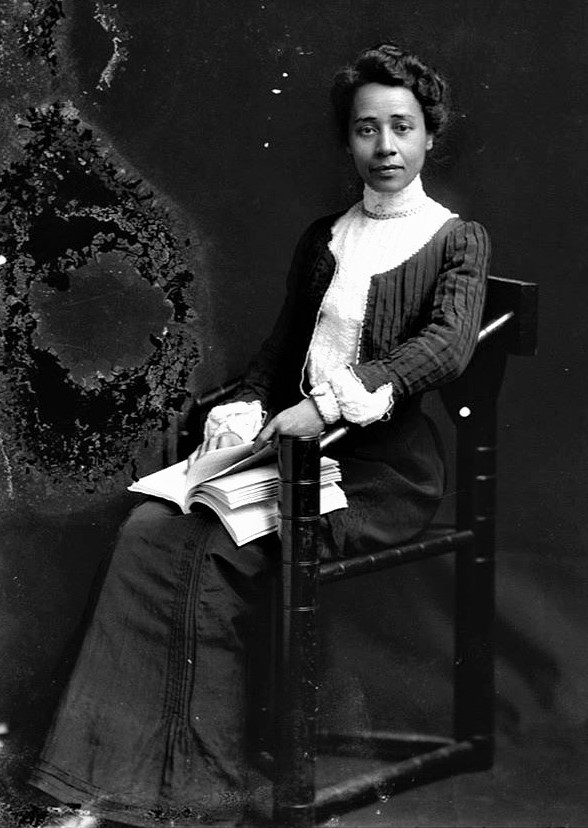 Anna Julia Haywood Cooper was a writer, teacher, and activist who championed education for African Americans and women. Born into bondage in 1858 in Raleigh, North Carolina, she was the daughter of an enslaved woman, Hannah Stanley, and her owner, George Washington Haywood.

In 1867, two years after the end of the Civil War, Anna began her formal education at Saint Augustine’s Normal School and Collegiate Institute, a coeducational facility built for former slaves. There she received the equivalent of a high school education.

Anna Haywood married George A.G. Cooper, a teacher of theology at Saint Augustine’s, in 1877.  When her husband died in 1879, Cooper decided to pursue a college degree. She attended Oberlin College in Ohio on a tuition scholarship, earning a BA in 1884 and a Masters in Mathematics in 1887. After graduation Cooper worked at Wilberforce University and Saint Augustine’s before moving to Washington, D.C. to teach at Washington Colored High School. She met another teacher, Mary Church (Terrell), who, along with Cooper, boarded at the home of Alexander Crummell, a prominent clergyman, intellectual, and proponent of African American emigration to Liberia.

Cooper published her first book, A Voice from the South by a Black Woman of the South, in 1892. In addition to calling for equal education for women, A Voice from the South advanced Cooper’s assertion that educated African American women were necessary for uplifting the entire black race. The book of essays gained national attention, and Cooper began lecturing across the country on topics such as education, civil rights, and the status of black women. In 1902, Cooper began a controversial stint as principal of M Street High School (formerly Washington Colored High). The white Washington, D.C. school board disagreed with her educational approach for black students, which focused on college preparation, and she resigned in 1906.

In addition to working to advance African American educational opportunities, Cooper also established and co-founded several organizations to promote black civil rights causes. She helped found the Colored Women’s League in 1892, and she joined the executive committee of the first Pan-African Conference in 1900. Since the Young Women’s Christian Association (YWCA) and the Young Men’s Christian Association (YMCA) did not accept African American members, she created “colored” branches to provide support for young black migrants moving from the South into Washington, D.C.

Cooper resumed graduate study in 1911 at Columbia University in New York City, New York. After the death of her brother in 1915, however, she postponed pursuing her doctorate in order to raise his five grandchildren. She returned to school in 1924 when she enrolled at the University of Paris in France. In 1925, at the age of 67, Cooper became the fourth African American woman to obtain a Doctorate of Philosophy.

In 1930, Cooper retired from teaching to assume the presidency of Frelinghuysen University, a school for black adults. She served as the school’s registrar after it was reorganized into the Frelinghuysen Group of Schools for Colored People. Cooper remained in that position until the school closed in the 1950s.