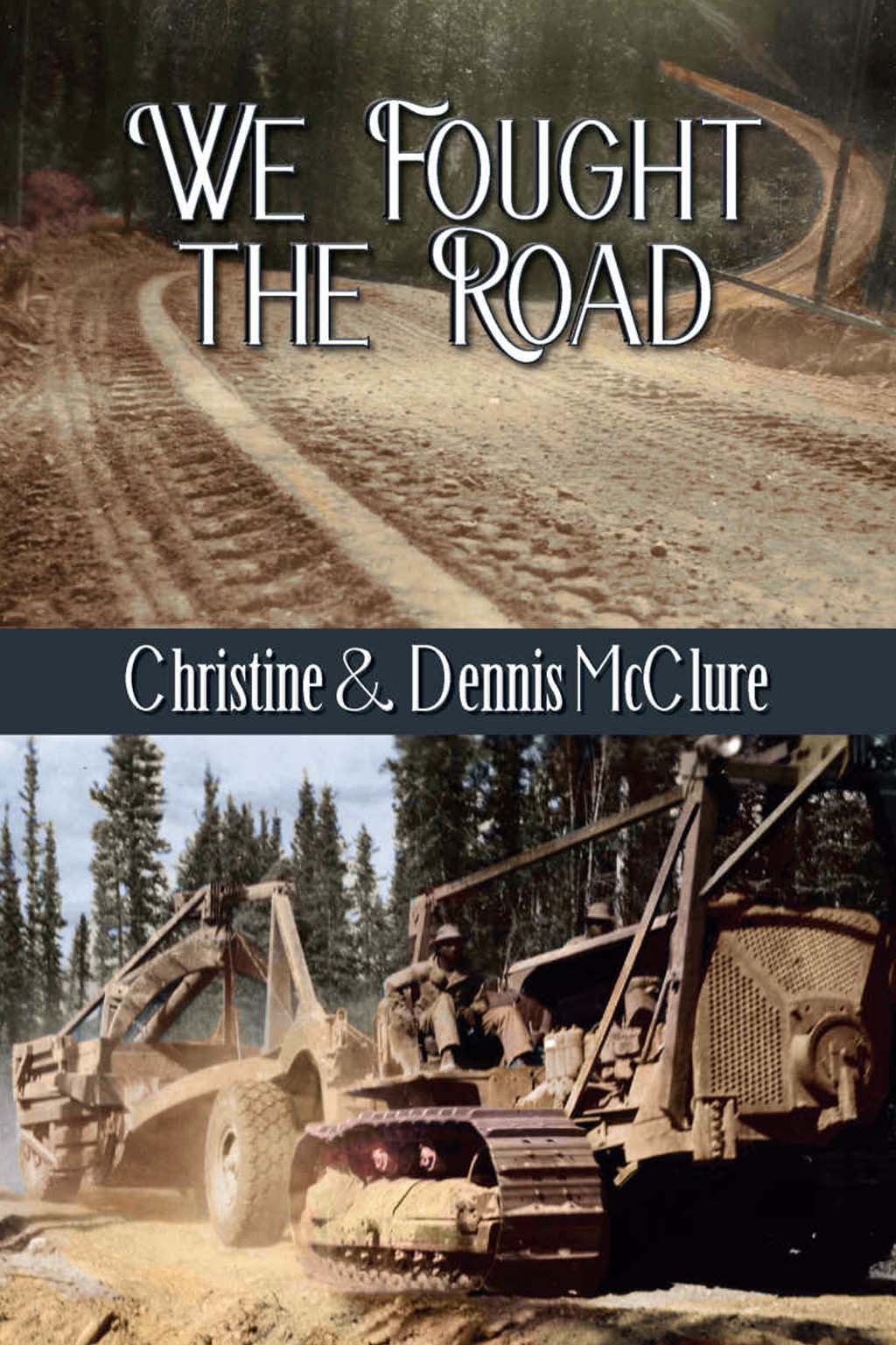 We Fought the Road (Epicenter Press, 2017) by Christine and Dennis McClure
Fair use image

In the following article independent historians Christine and Dennis McClure describe the role race played in the construction of the Alaska-Canada (ALCAN) Highway during World War II. The highway, constructed in eight months, stretched 1,600 miles from Dawson Creek, British Columbia to Delta Junction, Alaska. It was built by 11,000 soldiers in the U.S. Army Corps of Engineers.  About one third of the soldiers were African Americans organized in three newly formed Negro Regiments, the 93rd Engineer General Service Regiment, 95th Engineer General Service Regiment, and the 97th Engineer General Service Regiment. The 388th Engineer Battalion, formed around a cadre from the 93rd, remained in Yukon in 1943 to build the Canol Road from the Highway to Norman Wells. The account also highlights in particular experiences of these black soldiers which are described further in their new book on the subject, We Fought the Road.

The epic project that built the Alaska Highway and the Highway’s role in the defense of America during World War II is relatively well known. The racism that distorted and contaminated the project is not. Three segregated regiments worked on the Alcan. More than three thousand young black men faced up to the challenges that made the project epic, stood up to racism on top of that, and still delivered. And they received virtually no credit.

We knew that Christine’s dad had served as an officer in the Corps of Engineers and had worked on the Alaska Highway. When Christine’s mother passed away in 2009, we found among her effects a box of old photos and a bundle of letters “Tim” had written to her during the war years.

Intrigued, Christine read the letters and went through the photographs:  grainy, black-and-white images of a young Tim and of a lot of black soldiers. We had known that he served in a segregatedregiment, but we didn’t really know what that meant. Chris dug in; filled her sewing room with maps and books.

Between 1939 and 1941, war raged across Europe and in the Pacific and tensions grew between the United States and Japan. Thousands of Americans, both black and white, began turning up at enlistment centers around the country. A new draft law in 1940 brought in thousands more. And the Army struggled with how to incorporate black men. Black soldiers served in segregated regiments commanded by white officers.

The Japanese assault on Pearl Harbor panicked military and political leaders in the United States. The remote territory of Alaska and its Aleutian Island chain offered the Japanese a path to the American Continent. To defend Alaska, they would have to send men in numbers and materiel in quantities way beyond the capability of ocean and air transport.

In February, 1942, President Roosevelt dispatched the Army Corps of Engineers to build 1600 miles of highway through the most difficult terrain in North America, a land route to Alaska. And the Corps did it in just eight months and 12 days.

In 2013, we made our way north to Dawson Creek, British Columbia, looking for the ghosts of Tim and his black regiment. As soon as we made our way across the Peace River and up the highway, though, the ghosts began to take charge, gradually changing our mission.

At Sikanni Chief, the black soldiers of the 95th Regiment bet a month’s pay that they could bridge the river in four days. They did it in three. We walked along the rocky bank of the river absorbed by the murmur of the river and the deep quiet. We looked at the new bridge, then at the ruins of the Public Roads Administration Bridge. But there was another bridge there, a bridge of raw wood timbers cut, hewn, hauled and set in place by a little more than a hundred black soldiers working round the clock on the mountainside and chest deep in the icy water.

We found the old road. Dennis spotted two large hand-hewn timbers. We scraped away the dirt with our hands.  We touched the history of the black heroes who had put them there.

We used Tim’s old photos to triangulate the location, near Teslin, of the motor pool at Morley Bay where we knew 110 black mechanics had labored to fix equipment ravaged by mud, muskeg and weather. On an historic highway that bristles with signs and monuments, we found, at Morley Bay, only a peaceful bit of woods.

The crowning achievement of the 93rd was the 70-mile road they built from Carcross to the Teslin River. On June 16, 1942 the bulldozers and the hungry, exhausted black engineers of Company A had swarmed out of the woods to Johnson’s Crossing, completing the road to the Teslin River in 1½ months.

We crossed the river, stopped, and looked in vain for any sign they had ever been there. The black faces in my father’s photos haunted us. Those soldiers had fought nature and man to accomplish something stupendous. And no one knew it.

We searched archives along the way, but information about the 93rd simply didn’t exist. The Corps of Engineers in 1942 had reluctantly brought three black regiments to the project, and they had gone to great lengths to hide them. Film crews, journalists and photographers in 1942 followed the white regiments and ignored the black men.

In Carcross we met Millie Jones who was a schoolgirl in 1942. She remembers the exciting day when the first black troops of the 93rd came to the depot. They were “black white men!” Millie’s mother cooked for the hotel in Carcross, and the Army’s rules for black soldiers confused her as much as they confused her daughter. The soldiers couldn’t come into the hotel or even to the front door. We realized that the Army had brought racism to Canada with the black regiments. The racism that permeated their experience in Yukon was an import. The gross injustice gripped us.

As we traveled, looking hard for any information we could find, we caught our first break at the University of Alaska in Fairbanks. The archive there had Lael Morgan’s papers.  In the early 1990s, responding to the approach of the 50th anniversary of the Highway, Lael’s employer, National Geographic, assigned her to do a story on the construction of the highway. In the course of her research, Lael was infected with exactly the same obsession that now infected us. Where were the black soldiers in the record?

The story of Lael’s fight to get credit for these men is in the tangled notes and papers at the Rasmuson Library.  Lael gave us access and we found at least some of the information we wanted. Lael had actually found living veterans of the black regiments, including the 93rd.  Her papers contained interview notes.

We met Lael, in Anchorage; and, when she suggested we consider writing a book, the idea intrigued us. Our travel blog had caught the attention of Heath Twichell, author of Northwest Epic. He contacted us with a similar thought. A book might be in order.

Back home at the end of the summer, we dug into research. We visited the National Archives in Maryland—several times. We visited the Corps of Engineers History Museum in Virginia. We spent a week at the Army Records Center in St. Louis and found morning reports and rosters for the 93rd.

We put a website on line to serve as a repository for historical information about the black men on the Highway and to help us find veterans’ families. And we found families. We visited and interviewed all of them, collected copies of photos and information.

The young black men who came up with the black regiments, the 95th, the 93rd and the 97th, grew up under Jim Crow, a deeply racist social and legal system. Army regulations for black soldiers simply incorporated Jim Crow laws. Young black men assigned to the 93rd Engineers lived in tents in swampy, snake-infested lowland at the back of Camp Livingston, Louisiana, separated from white troops.

One day the Army ordered the troops of the 93rd to board a train. They rode the train for days until the train stopped. They were herded on to a ship. The ship docked in frigid Skagway in April. They had no idea where they were or why they were there. The Army refused to allow them to visit or even speak to natives or local residents.

The black engineers stayed in Yukon through the winter of 1942/43. When the 93rd engineers completed their section of the road they convoyed 335 wintry miles north to build barracks for the white 18th Engineers. They, the black men, lived in tents at temperatures of 40 to 60 below zero. Roaring fires in barrel stoves couldn’t even melt the frost off the canvas. Totally isolated, their only friends were their tent mates.

In a letter, written in December, 1942, Captain Edward G. Carroll, black chaplain of the 95th Engineers, said of the road and its builders, “Only those can really say ‘we have fought the road’ who have actually worked with sweat and blood on its construction.”  When we finished the manuscript, rewrote it and with support and advice from both Lael Morgan and Heath Twichell rewrote it again, we titled it We Fought the Road.

Leonard Larkins, a private with the 93rd Engineers, “fought the road”. After the Highway was complete, he went with the 93rd to the Aleutians. At the end of the war he returned to Louisiana where he married and raised ten children. The memories of his time in Canada gradually receded, until 2016 when his son, Bert, found our website.

This year is the 75th anniversary of the Highway. Groups in Alaska have used the occasion to raise awareness of the black soldiers’ contributions. In May they brought Leonard Larkins and three of his sons to Alaska. Appearing with Leonard at an event in Anchorage, Governor William Walker spoke for all of us, when he thanked him.

McClure, C. (2017, October 23). The Construction of the Alaska Highway, 1942: The Role of Race in the Far North. BlackPast.org. https://www.blackpast.org/african-american-history/construction-alaska-highway-1942-role-race-far-north/