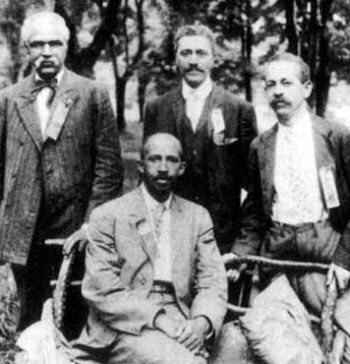 This Academy is an Organization of Authors, Scholars, Artists, and those distinguished in other walks of life, men of African descent, for the promotion of Letters, Science and Art; for the creation, as far as possible, of a form of intellectual taste; for the encouragement and assistance of youthful, but hesitant, scholarship; for the stimulation of inventive and artistic powers; and for the promotion of the publication of works of merit.

Article 1
The officers of the Academy, to be elected annually, shall be a President, four Vice-Presidents, a Corresponding Secretary, a Recording Secretary, a Treasurer, and an Executive Committee of five persons, who shall perform the usual duties of such offices.
When onerous duties are judged to demand it, the Secretaries may be salaried men.

Article 2
The membership of the Academy shall be limited to fifty persons.

Article 3
The conditions of membership shall be:
(a) Candidates shall be men of Science, Letters and Art, or those distinguished in other walks of life.
(b) Candidates must be recommended by six enrolled members, in a written application, through one of the Secretaries.
(c) Admission to membership shall be by ballot—by a two-thirds vote of all the membership, voting in person or by proxy—due notice having been given, two months before the balloting, to every member.

Article 4
The Academy shall endeavor with care and diligence:
(a) To promote the publication of scholarly work;
(b) To aid youths of genius in the attainment of the higher culture, at home or abroad;
(c) To gather into its Archives valuable data, and the works of Negro Authors;
(d) To aid, by publications, the dissemination of the truth and the vindication of the Negro race from vicious assaults;
(e) To publish, if possible, an “ANNUAL” designed to raise the standard of intellectual endeavor among American Negroes.

Article 5
The Academy may invite authors and writers, members and others, to submit their proposed publications to the criticism and judgement of the Academy: and if they shall receive its approval such publications may be issued under the recommendation of the Academy.

Article 6
The Annual Meetings of the Academy shall take place in the City of Washington, which shall be its seat, in the month of December, when papers shall be read, and such other exercises be held as the Academy, from year to year, may order.

Article 7
The admission fees to the Academy shall be $5.00 (including the first annual fee) and members shall be assessed annually $2.00; failure in payment of this or any other obligation voluntarily assumed for two years, shall cause membership to cease. Special assessments may be made for publications.

Article 8
In the publications of the Academy no titles of degrees shall be joined to the names of the members.

Adelaide Cromwell Hill & Martin Kilson, eds., Apropos of Africa:
Sentiments of American Negro Leaders on Africa From the 1800s to the
1950s