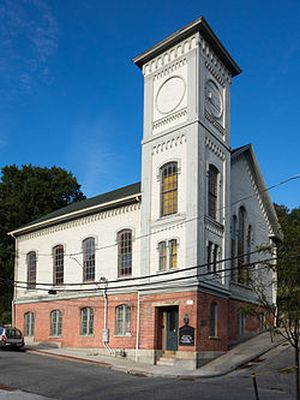 Congdon Street Baptist Church is the oldest African American church in Rhode Island. The church, located on College Hill, sprang from the effort of the black community in the city to provide a place for people of color to worship and a locale for a secular school for black children in the city.  This effort combined the work of a small group of black Rhode Islanders and sympathetic white residents.

The campaign to create a church began March 9, 1819 at a gathering in the city’s First Baptist Meeting House. A group of 12 men were chosen to appeal to Moses Brown, popular New England Quaker abolitionist and industrialist, and the wealthiest individual in the state. Brown, who is more generally known as the cofounder of Brown University in 1764, purchased land that would become the site of the African Union Meeting House.  That structure was completed in 1820 and it housed both the church and the Schoolhouse Society. Initially the church was interdenominational.  Its members included those who considered themselves African Methodist Episcopal (A.M.E.), A.M.E. Zion, Free Will Baptists, Calvinists, and Missionary Baptists.  Several of these denominations later decided to pull out of the African Union Meeting House to establish their own churches to assert their distinct denominational identities. After the various exoduses from the church, the remaining members were Baptists and Calvinists who in 1840 changed the name of the African Union Meeting House to the Meeting Street Baptist Church.

In 1863 hostile white neighbors of the church tore down the building leaving the congregation without a permanent place of worship for one year.  Eventually the congregation arranged an exchange of lots with one of the church’s neighbors who disagreed with the mob’s actions. The church moved from its previous location at Meeting Street and Congdon Street to Congdon Street and Angel Court. The new building was finally completed in July 1875 at the cost of $16,000.  It was renamed the Congdon Street Baptist Church.

The New England Baptist Missionary Convention organized in the new church. However, in the ensuing years after the church’s dedication in 1875, several groups pulled out of Congdon to create their own churches.

Despite these setbacks, the Congdon Street Baptist Church remains a house of worship to this day.  In 1971, the church was added to the National Register of Historic Places not only for its historical significance as a church which was then well over a century old, but also for its rare architectural style.  The church was built in an Italianate-Medieval Revival style popular for that era but rare in the 20th century.

Congdon Street Baptist has a proud history.  The church has served as a community center, a school, and on occasion a substitute classroom for nearby institutions of higher learning. The church continues to host local community events, food donation drives, and informational sessions on various topics such as the status and challenges of historic black colleges (HBCUs) and domestic violence prevention. The Congdon Street Baptist Church is locally known as the “friendly church on the hill.”