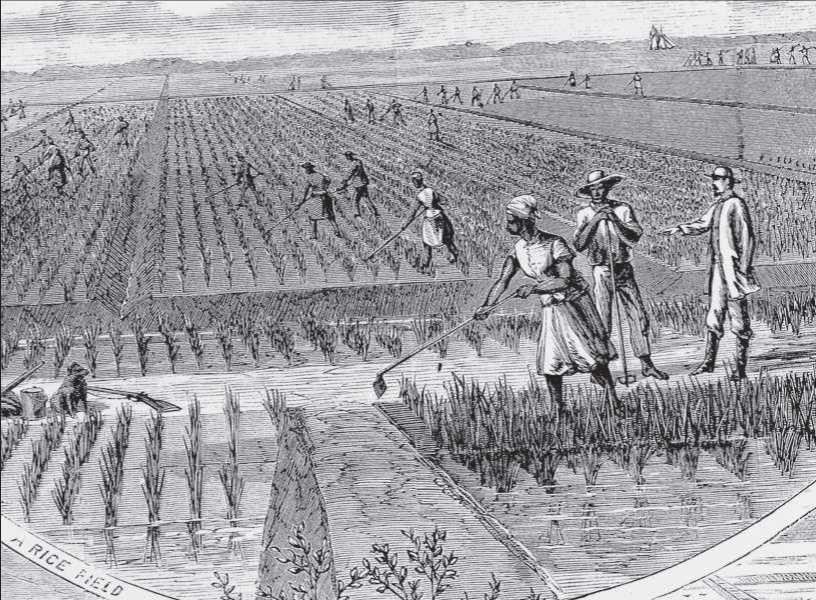 By 1708 South Carolina became the first British North American colony to have an African American majority. The first Africans to arrive in South Carolina likely came in 1526 as part of the San Miguel de Gualdape Colony organized and sponsored by Spain. When the colonial settlement failed, those Africans joined and became absorbed into the Native American population.

The first English settlers arrived in 1670 and founded Charleston. The early settlers by 1700 discovered that rice was the cash crop best suited for South Carolina’s semi-tropical climate. The first planters also discovered that Africans from Senegal and other traditional rice-growing regions of West Africa would be the best workers to produce this crop. Capitalizing on their extensive trade with Barbados, which already had a well-established pattern of African slavery, the South Carolina planters began to import enslaved Africans from Barbados and other West Indian islands and eventually directly from West Africa.

By 1708, the enslaved Africans and their descendants in South Carolina had become the majority of the colony’s population of approximately 8,000 people. For the next two centuries, except for a brief period between 1790 and 1820, Black South Carolinians continued to be the majority of the colony and then the state’s residents. Whites would finally outnumber Blacks only after 1920 when thousands of African American residents began leaving the state for Northern cities in the Great Migration.

This Black majority first came about because white planters, recognizing the intricacies involved in rice cultivation, used the unpaid labor of these Africans and their descendants to perform the complex, arduous work of rice cultivation. The flooding necessary to grow rice in coastal tidal fields also created deadly working conditions that would take the lives of thousands of enslaved men, women and children who over the next two centuries perished in the stagnant mosquito and disease-infested swamps. These women and men paid with their lives for the eventual riches enjoyed by the planters in coastal South Carolina.

Besides growing rice and eventually indigo, these Black South Carolinians also built houses, cooked, gardened, raised cattle, and provided other forms of unpaid labor to grow the prosperity of this region. Black slaves were particularly concentrated in the Sea Islands along the coast of South Carolina from Charleston south to the Georgia border where they often comprised 90% of the population.

Although concentrated in the tidewater region of the state, the large Black population ensured that the Black majority remained for the entire state until well into the 20th century. Its presence shaped the society both in terms of servile resistance including insurrections in 1739 and 1740, the latter being the famous Stono Rebellion, and in the passage of “slave codes” designed to control and limit Black life in the colony and then, after the American Revolution, the state.

Its presence also shaped the Civil War, as some of the first Black Union soldiers were recruited in the coastal region of the state and  many of the first efforts to prepare former enslaved people for a life of freedom took place there even as the war continued to be fought across the rest of the nation.  The impact of the Black majority extended into Reconstruction where bitter, violent attacks on Black male voters including racial violence in the infamous Hamburg Massacre (1876) ended the most extensive African American political participation in the nation as many Black officeholders were forcibly removed from their posts.

Finally, the post-Reconstruction economic and political restrictions helped lead to the migration of thousands of Black residents from South Carolina beginning with World War I for northern cities stretching from Boston to Washington, D.C.  South Carolina’s Black majority through most of its history has been the major force in shaping the political economy of the state from the early 1700s until well into the 20th century.