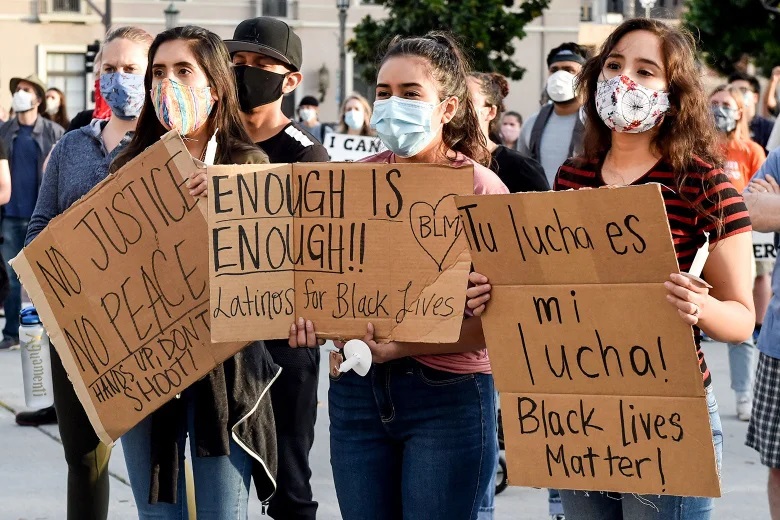 For U.S. Census purposes race and ethnicity are considered distinct identities, with Hispanic or Latino origin asked as a separate question. Thus, in addition to their race or races, all respondents are categorized by membership in one of two ethnic categories: “Hispanic or Latino” and “Not Hispanic or Latino.” For example, a person could self-identify as African American racially but ethnically as Hispanic. In a 2016 study, 25% of Latinos in the U.S. identified as Afro-Latino or Afro-Caribbean.

This demographic shift has raised questions about the relationship between the two groups. Some speculate that this rapidly growing Hispanic population has generated tension between African Americans and Latinos as both groups vie for jobs, educational opportunities, and political power. As early as 2003 some African American state legislators in Georgia moved to prevent the inclusion of Hispanics among the state’s protected minorities.

Other observers refute the antagonism argument. One academic study concluded that “there is no evidence that local Hispanic presence … raises the self-reported distress of African Americans.” In fact, it was found that African Americans living in areas with a substantial Hispanic presence feel warmer toward Hispanics than Blacks in localities where the Hispanic population is small. The authors conclude that where Hispanic cultural “infusion is already existent and appreciated (in the Urban Northeast or in Southern California), Hispanics are not seen as a threat.” In African American areas where the Hispanic population has recently surged such as the U.S. South, there have been “cooler” feelings toward the newcomers.

African American and Hispanic political leaders and social activists share many of the same concerns and thus urge unity to address those concerns including criminal justice reform, voter suppression, mental health and trauma, and education. They also support political policies to grow the middle class such as housing loan programs and increasing the minimum wage.

Other observers, however, point to social and religious conservatism among Latinos as a factor in making these groups rivals. There have been efforts in the U.S. Southwest, the area of the largest concentration of Latinos, by the Republican Party to make inroads into what were once solidly Democratic Latino areas, by appealing to that conservatism.

It is impossible to predict how racial relations between these groups will develop in the future. In fact, racial and ethnic divisions are increasingly difficult to quantify. The number of people who identify as multiracial increased by 267% between 2000 and 2020. If this trend continues, the differences will certainly blur as people view themselves in less rigid categories.