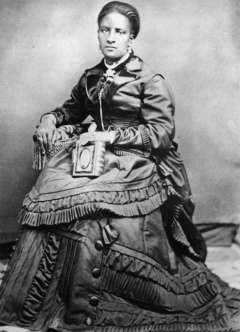 Fifty years before the 19th Amendment was passed, Wyoming legislators enacted the Wyoming Women’s Suffrage Act in 1869. The bill granted women in the Wyoming Territory the right to vote, free from restrictions such as property ownership, monetary requirements, or marital status requirements. This meant that Black women were technically allowed to vote as well.

The motivations for granting women the right to vote in 1869 Wyoming are complicated, but we do know that it was not entirely about a passion for women’s rights. White supremacy was interwoven throughout the suffrage movement and many white suffragists argued that the voting power of white women would counter and override Black male votes. This seems to be largely what motivated territorial leader William Bright to introduce the Wyoming Women’s Suffrage Act. Bright, who had been opposed to giving Black men the right to vote, believed that if Black men could vote, his wife should be able to vote as well. Other motivations for passing the law may have been that there were very few women in the territory at the time, about 6 men for every 1 woman. It is possible that Wyoming men hoped that granting women the right to vote would attract more women to the territory.

While Bright’s motivations may have been specious, and we may never know the exact motivations behind the lawmakers’ votes, there were certainly many legislators who believed that granting women the right to vote was the right thing to do. And so the law passed the Council (Territorial Senate) by 6 to 2 and then in the House by 7 to 4. On December 10, 1869, Territorial Gov. John Allen Campbell signed the bill into law.

One stipulation included in the bill was that women had to either be naturalized citizens or swear an oath that they were seeking citizenship. This would have excluded Chinese immigrants as well as Native American women, who were not considered citizens until 1924. According to census data, there were 10 Black women over the age of 21 in Wyoming at the time. These Black women would have been eligible to vote.

While there were no voter rolls kept at the time to give specific information about the women who voted, there is an account from Wyoming Territorial Supreme Court Justice John Kingman. Six years after the 1870 vote, Kingman recounted the apprehension he felt at witnessing a group of African American women voting in that election. “After a while a carriage drove up with four of these colored girls in it. They were helped out, and as they went up to the polls,” Kingman said, “the crowd quietly parted; they voted and returned to the carriage without a word said. Then I breathed freely; I knew that all was safe.”