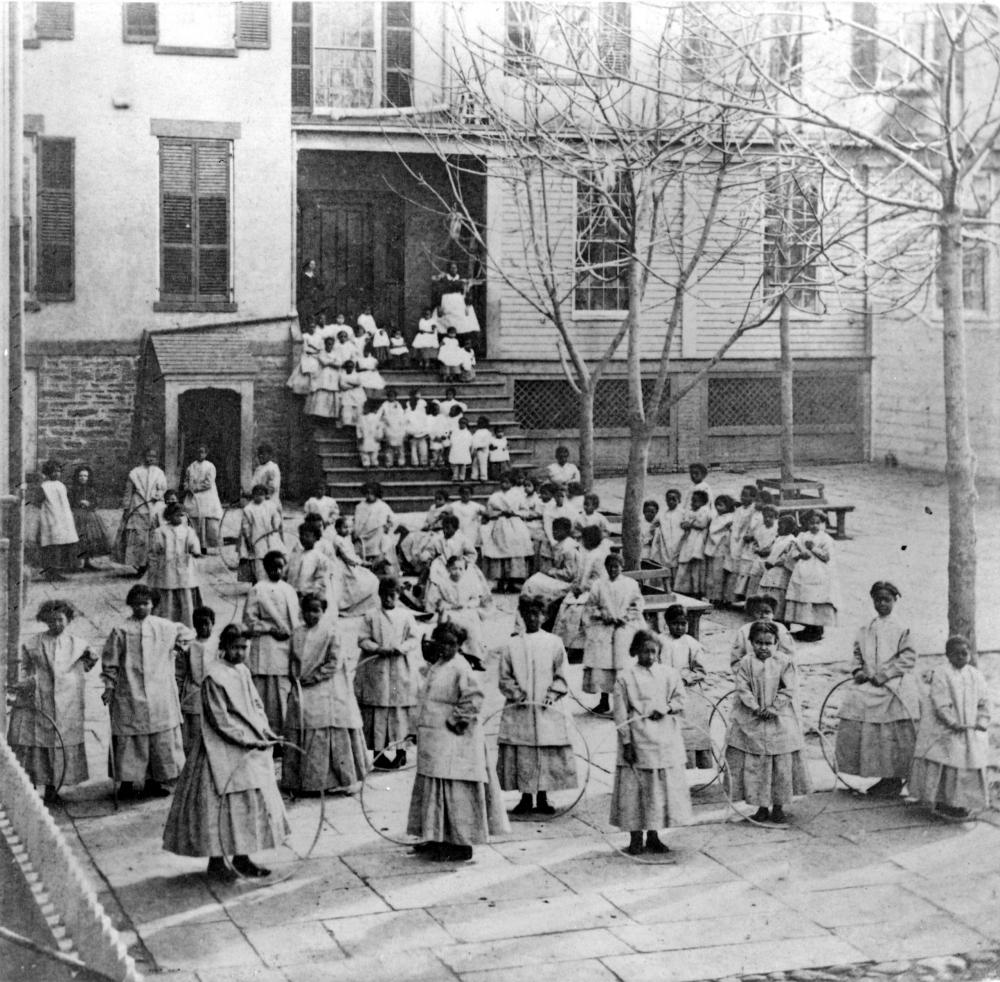 There was much racial unrest in New York City, New York in the early 1800s as immigrants from across Europe and migrants from neighboring states arrived in the city. Slavery was abolished in New York state in 1827. Although black New Yorkers were free, many of their families were broken because of the sale of parents or children.  General poverty among all ex-slaves and many free blacks also meant families could not afford to stay together. There was a need for shelter and schooling for numerous black children in the city.  As a consequence, 25 people, mostly Quakers, Presbyterians, and other abolitionists founded the Colored Orphans Asylum of New York.

The first building was purchased in 1836 and was located at 12th and Fifth Avenue in Manhattan.  It housed 11 children. It was managed by three of the founding members, Hanna and Anna Shotwell and Mary Murray. The organization moved in 1843 to a large four-story home at 43rd and Fifth Avenue. Dr. James McCune Smith, the nation’s first licensed black medical doctor, became the orphanage’s medical director in 1846. The Asylum housed anywhere from 200 to 800 children at any given time in the antebellum period. By this point fewer than a third of the children were orphans, and at about 12 years of age, many were returned to their parents or placed in positions as farm laborers or domestic servants.

In the summer of 1863, New York City experienced the Draft Riots, the largest urban uprising in the nation’s history. On the morning of July 13, 1863, a mostly Irish mob took to the streets and began burning buildings, smashing windows, and pulling up cobblestones in the streets. The mob proceeded through the streets to the Orphan’s Asylum and broke into the building with pickaxes. They trashed and ransacked the building before setting it on fire. While the mob was focused on breaking into the building, the superintendent of the Asylum, William E. Davis, and the head matron, Jane McClellan, quietly led 233 children out the back entrance. A crew of firefighters of Hook and Ladder Company No. 2, valiantly fought the flames. Two firemen, Chief Engineer Decker and Paddy McCaffrey, showed exceptional bravery trying in vain to put out the fire, while fighting the angry mob.

The children were taken to the Twentieth Precinct building which was located on 35th Street near 7th Avenue where they remained for the next three days until the riots ended. At least 120 people were killed and more than 2,000, all mostly African Americans, were injured.  The children from the Orphans Asylum, however, were moved to Blackwell’s Island (now Roosevelt Island), along with many other African American refugees whose homes had been burned by the mob. All Asylum children survived the riots, and after a short time at Governor’s Island, they were moved to a residence in Carmansville.

The Asylum was rebuilt in 1867 at 143rd Street and Amsterdam Avenue, and in 1907 was relocated again to the Riverdale section of the Bronx. In 1944, the Association’s name was changed to the Riverdale Children’s Association. The Asylum went through several moves and name changes until 1988, when the Westside Center for Family Services, as it was then known, merged with Harlem-Dowling Children’s Services, which is still in existence today.