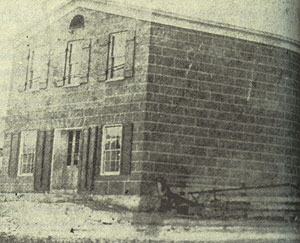 In 1877 a small village blossomed that was home to freedpeople slaves from Victoria County, Texas. Ex-slaves, Joseph Smith and George Washington, both born in Virginia, opened a freight and passenger business hauling goods from the Gulf Coast to Victoria and neighboring towns. With their earnings both men bought town lots and homes in Victoria.

As anti-black violence increased in Reconstruction-era Texas, Smith and Washington prospered financially but their safety was not assured. Using their knowledge of the local area, Smith and Washington purchased land between the towns of Victoria and Goliad south of San Antonio. Washington acquired 510 acres along Perdido Creek on April 5, 1877. While no record exists for Smith’s purchase, he went to the Goliad courthouse the same year to record a transfer of his possessions, including 200 acres, to his wife.

Smith and Washington then sold land to other African American families from Victoria giving birth to a new colony. As the population increased the settlers called their village Perdido. The town prospered as a cattle and pig slaughtering and shipping center and, at various times, was called Centerville, Ira, or Ira Station. The slaughtering plant led to the town’s final name. When resident William Young submitted an application requesting a post office, he proposed the name Cologne because he thought it was time for a more sweet-smelling fragrance in town as opposed to the hog stench. The Postal Service approved Young’s application for Cologne.

In 1889, The Gulf, Western Texas and Pacific Railway built a branch line through town with a depot and station stop. For ten years the village had the only integrated railroad depot in Texas.

While the town of Cologne is no longer evident, the cemetery remains. Most of the stone markings have eroded and many stones are buried in the dirt, but the metal headstone of Joseph Smith still stands. No stone is evident for Washington, but his son, Nathan Washington has a large plot. From freedom to death the African-American founders of Cologne reside together