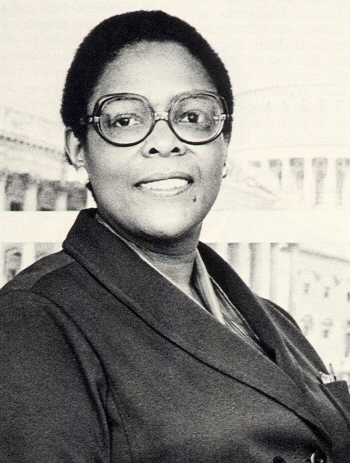 Cardiss Robertson Collins was born September 24, 1931 in St. Louis, Missouri, the daughter of Findley Robertson and Rosa Mae Robertson.  At the age of 10 her family relocated to Detroit and she spent the rest of her childhood there, eventually graduating from the Detroit High School of Commerce. After high school Collins attended Northwestern University in Chicago and later became a stenographer with the Illinois Department of Labor. She was promoted several times until she reached the position of revenue auditor for the Illinois State Department of Revenue.

Through her husband, George Collins, and his involvement in politics, Collins became a Democratic Party activist in Chicago. She served as a committee member of the city’s Twenty-fourth Ward Democratic Organization among other community organizations. She was highly visible during George Collins campaigns for Illinois’s Seventh Congressional seat and stayed involved after he won the election. After George Collins passed away in a plane crash near Chicago’s Midway Airport in 1972, a special election was held to fill his seat. Cardiss Collins was nominated by the Democratic Party and easily won the seat left vacant by her husband on June 5, 1973 which she held continuously until 1997.

The election made her the first African American woman to represent a Midwestern Congressional District, one of many firsts that Collins would represent during her 23 years in office. Cardiss Collins was selected as a Democratic whip-at-large, an appointment that made her both the first African American and the first woman to hold the position. She also served on the Government Operations Committee, the Committee of International Relations, the Energy and Commerce Committee, and the Committee on Narcotics Abuse and Control. Collins was elected president of the Congressional Black Caucus in 1979, a position she used to criticize the policies of Presidents Jimmy Carter and Ronald Reagan.

Cardiss Collins was an enormously successful Congresswoman who was reelected to serve in Congress with large margins in each of her terms. She was rewarded for exemplary service with honorary degrees from Loyola and Roosevelt Universities in Chicago and from the Congressional Black Caucus. Her work in National Healthcare and Child Safety was responsible for new laws increasing the protection and opportunities for critically disadvantaged groups. In 1996 Collins chose to not run for reelection and moved to Alexandria, Virginia where she still lives.