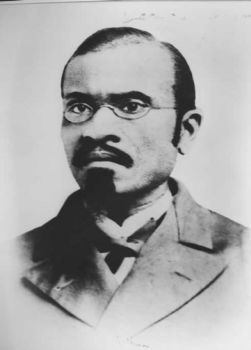 Solomon Melvin Coles was a minister, educator, and community leader.  Born a Virginia slave in 1844, Coles pursued an education before the Civil War, and in its aftermath moved to Connecticut where available educational opportunities existed for African Americans.  In 1869 Coles became the first African American to graduate from the Guilford Institute in Guilford, Connecticut, but because of racial policies he could not attend nearby Yale University.  Consequently he enrolled in Lincoln University in Pennsylvania, an all-black institution, where he delivered the salutatory address at the commencement for his bachelor’s graduation in 1872.  Yale meanwhile eliminated its racial restrictions and Coles enrolled in its Divinity School, receiving a Bachelor of Divinity degree in 1875.  While attending school, Coles spent summers boosting his ministerial skills and increasing membership in area churches on behalf of the American Missionary Association (AMA).

After graduation Coles was unable to find suitable employment despite his exemplary training. Nonetheless he continued his work with the AMA and established the Nazarene Congregational Church in Brooklyn.  In 1877 he received a permanent assignment to the Freedom Congregationalist Church in Corpus Christi, Texas.  Coles found a small community of 300 African Americans in this coastal Texas city, virtually none of whom had access to adequate education.  To address this problem he founded a small private school and assumed the task of educator, along with his ministerial duties.  In 1878, he became the principal and teacher of the newly established Public Free School for Colored, and for the next four years taught and administered the school in the city.  With the Corpus Christi’s black population increasing, he gave up his pastoral duties in 1880 for more time in the classroom.

An exceptionally talented and well-educated black man, Solomon Coles aided the growth and development of the black community of South Texas. By 1883 he expanded his influence and joined the Southwest Texas Congregational Association and helped establish the Colored Teachers State Association of Texas.  Coles served as its president, and also penned several articles on issues of race, education, and religion for the Lincoln University Alumni Magazine. In 1887 he traveled to New Orleans where he met and married Cornelia Lewis. They had two children, Iphigenia C. and Emma May, but just four years later Cornelia and Emma May died.

Although Coles enjoyed the people of Corpus Christi’s African American community, he became disenchanted with the discriminatory salary and declining racial climate in the city and moved to San Antonio in 1894. After twenty years of teaching at elementary schools in the Alamo city, first at Riverside Elementary and then at Douglass Elementary, he retired and moved to Oberlin, Ohio in c. 1915.

Solomon Melvin Coles died in Oberlin, Ohio in 1924.  The following year the city of  Corpus Christi named a public school after him and in the year 2000 Del Mar College in the city named a classroom building in his honor.