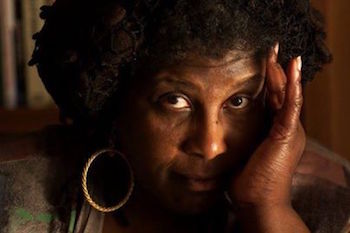 Wanda Evans Coleman was an American poet and writer who won critical acclaim for her avant-garde work, but remained relatively unknown to a broader audience. Her 30 year literary career included a myriad of poetry and fiction publications.

Born and raised in the Watts section of Los Angeles, California on November 13, 1946, Coleman was the daughter of George and Lewana (Scott) Evans. Her father was an ex-boxer and long-time friend and sparring partner of Light Heavyweight Champion Archie Moore.  He also ran a sign shop during the day and worked the graveyard shift as a janitor at RCA Victor Records. Her mother worked as a seamstress and as a housekeeper for Ronald Reagan, among other celebrities.

When she was 13, her first poem was published in a local newspaper. As teenagers she and her brother worked for their father in his home-based publishing company, an experience that prepared her for a career as a freelance writer.

Afterwards, Coleman worked as a secretary, proofreader, magazine editor, journalist, and Peace Corps and Vista assistant recruiter to support her writing. She was also a screenwriter for Days of Our Lives, a daytime television series and won an Emmy for her work on the 1975-76 season of the series.  She also experimented in theater, dance, and acting.

By the 1980s Coleman’s uncompromising writing style brought her national attention. In 1981 she received a National Endowment for the Arts grant and in 1984 she was awarded a Guggenheim Fellowship for Poetry. The volume “Bathwater Wine,” which became her seminal work, garnered her the 1999 Lenore Marshall Poetry Prize.

Coleman was the recipient of several other awards including one from the California Arts Council in fiction and in poetry. In 2001 she was nominated for the National Book Awards for “Mercurochrome.” In 2003, she became the first literary fellow for C.O.L.A. (City of Los Angeles, Los Angeles Department of Cultural Affairs).  She was also a finalist for California poet laureate in 2005.

After a long illness, Coleman passed away on November 22, 2013 at Cedars-Sinai Medical Center at the age of 67.