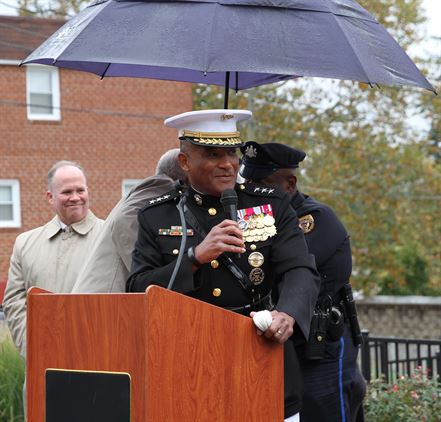 Lieutenant General Ronald S. Coleman is the second black person in the United States Marine Corps to reach a three-star rank, which he earned in 2006. Coleman also earned the FrenchLegion of Honor, the Meritorious Service Medal, the Legion of Merit, and the Defense Superior Service Medal.

Coleman was born August 27, 1948 in Darby, Pennsylvania to Charles and Barbara as one of eight children, four boys and four girls. Charles was a custodian for the Darby School District and Barbara was a homemaker. In high school Coleman made a name for himself as a star football, basketball, and baseballplayer. After graduation in 1968 from Darby-Colwyn Senior High School, he attended the North East Christian School for a year, considering becoming a minister. Coleman then joined the U.S. Navy and served in Vietnam. He was discharged from the Navy in 1970 and then enrolled at Cheyney University, where he graduated with a Bachelor’s degree in Education in 1973. The following year Coleman was commissioned as a Marine Second Lieutenant after completing Officer Candidate School.

Over the next two decades Coleman rose through the ranks from Second Lieutenant Coleman where he served as a Platoon Commander with 2nd Marine Regiment at Camp Lejeune, North Carolina to Operations Officer for the Landing Support Unit Foxtrot in Okinawa, Japan in 1977 to Instructor at Quantico, Virginia’s Amphibious Warfare School in 1985. Coleman attended the Marine Corps Command and Staff College for two years and then returned to Okinawa, Japan as Commanding Officer of Contingency Marine Air Group Task Force 4-90.

Upon return to the United States in 1991, Coleman served at the Headquarters of the Marine Corps in the Pentagon and the following year he was promoted to Lieutenant Colonel before being transferred to Camp Lejeune in North Carolina where he served first as Commanding Officer of the 2nd Maintenance Battalion and then as Deputy Operations Officer. In 1995 Coleman attended the National Defense University’s Industrial College of the Armed Forces, and a year later returned to the Pentagon to serve as Deputy Division Chief at the Logistic Readiness Center.

In 1997 Coleman, now a Colonel, served as Assistant Chief of Staff for the 2nd Marine Division at Camp Lejeune before being deployed to serve as Chief of Staff for the Joint Task Force Shining Hope in the Balkans in 1999. In 2002 Coleman was promoted to Brigadier General. He was deployed in 2003 in support of Operation Iraqi Freedom where he served as Commanding General Special Purpose MAGTF, then the following year in Operation Secure Democracy as the Commanding General of the Combined Joint Task Force Haiti. In 2005 Coleman became the Director of the Personnel Management Division and in 2006 was promoted to Major General prior to advancing to the rank of Lieutenant General later that same year. Also in 2006 Coleman became the Deputy Commandant for Manpower and Reserve Affairs for the U.S. Marine Corps, the position he held until retirement in 2009.

In 2014 Coleman’s wife, Kathryn Jane, passed away after having spent much of her life with Coleman once they met as adolescents. Together they had five daughters, Kathryn, Susan, Jennifer, Christina, and Stephanie.  In 2016 Coleman’s hometown of Darby, Pennsylvania honored his accomplishments in the Marine Corps by naming a street after him.