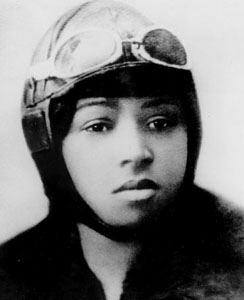 In 1921, Bessie Coleman became the first black woman to gain an international permit to fly. After learning French, she attended the famous flight school Ecole d’Aviation des Frères Caudron in Northern France. No schools in America would train a black person. She was inspired to fly by the stories of Frenchwomen flyers told by her brother John, who had served in France during World War I. Coleman performed acrobatics in air shows around the country and gave lectures inspiring audiences that included many children. She believed that there was freedom in the skies and would not perform in an air show with a segregated audience. On April 30, 1926, she was killed in an airplane piloted by William Wills, her mechanic and publicity agent, as he flew her over the field of the next day’s air show in Jacksonville, Florida where she was slated as the star. Coleman who was 34 at the time of her death, had just purchased a Curtiss JN-4 (Jenny) airplane in Dallas, which Willis flew to Jacksonville in preparation for the show.

Elizabeth “Bessie” Coleman was born in Atlanta, Texas, on January 26, 1892 as the tenth of thirteen children to parents George and Susan Coleman. The family settled in Waxahachie, Texas, and worked as sharecroppers. Her mother encouraged Bessie’s schooling when she showed an aptitude for math. At the age of 18 Coleman enrolled in the Oklahoma Colored Agricultural and Normal University (now called Langston University) in Langston, Oklahoma.  She remained their one term.  In 1916 aty the age of 23 she moved to Chicago, Illinois where she lived with her brother Walter, a Pullman porter. Coleman became a manicurist and worked in the Chicago White Sox barbershop.

Hearing stories from pilots returning home from World War I encouraged Coleman to think about flying but when she attempted to enroll in flight schools she was turned down because she was black and a woman.  When no black U.S. aviator would train her, Coleman received encouragement and financial support from Robert Abbott, the editor of the Chicago Defender and black Chicago banker Jesse Binga.  Abbott encouraged her to study abroad.

Coleman took a French language course in Chicago and then traveled to Paris on November 20, 1920 to seek training to ger her pilot’s license.  She completed her training and received her license on June 15, 1921.  Coleman continued her training in France and in September 1921 she returned to the U.S. where she became a media sensation.

When she returned from Paris Coleman worked as a restaurant manager to save money to purchase an airplane. She was helped in this endeavor by friends who included Edwin Beeman from the chewing gum family and Robert S. Abbott, editor and publisher of the Chicago Defender newspaper.  Coleman moved to Orlando, Florida and opened a beauty shop to help finance the purchase of her own plane.  Finally, realizing that she could make more money by becoming a barnstorming stunt flyer, Coleman returned to Europe in 1922.  She took course in France and then traveled to the Netherlands where she met Anthony Fokker, one of the world’s leading aircraft designers.  She eventually traveled to Germany where she visited the Fokker Corporation and received training from one of the company’s chief pilots.  She returned to the U.S. as “Queen Bess” and launched her new career, making her first appearance  in an American airshow on September 3, 1922 at an event honoring veterans of the all-black 369th Infantry Regiment of World War I fame.

Her dream to open a flying school was never realized, but several years after her death, black aviators formed a network of Bessie Coleman Aero Clubs.  The largest of these was organized by pilot William J. Powell in Los Angeles.  In 1990, a road near Chicago’s O’Hare International Airport was renamed for her and five years later the U.S. Postal Department issued the Bessie Coleman Stamp. She was inducted into the Texas Aviation Hall of Fame in 2000 and the National Aviation Hall of Fame in 2006.