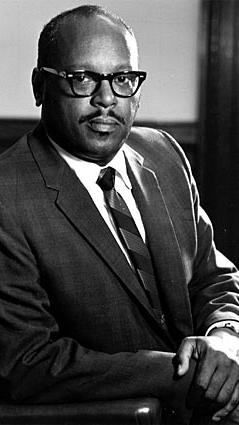 Harry Cole, the first black justice on the Maryland Supreme Court, was born on January 1, 1921, in Washington, D.C., to a tailor and his wife. Shortly after his birth, Cole’s father died, and his mother moved him and his four siblings to her hometown, Baltimore, Maryland. Cole attended Douglass High School, graduating in 1939. Four years later, in 1943, he graduated from Morgan State College with honors. During his senior year at Morgan State, he helped organize the 1942 “March on Annapolis” to protest the Jim Crow laws in Maryland. Cole graduated from Baltimore’s University of Maryland Law School in 1949.

Between his undergraduate and graduate education, Cole served in the U.S. Army during World War II, first in France and Belgium, and later in the Pacific. Cole rose to the rank of First Lieutenant in the Quartermasters Corps from 1943 to 1946.

Immediately after graduating from law school, Cole worked with lifelong friend and fellow lawyer Robert B. Watts at the Baltimore NAACP. In 1953, however, Cole became the first African American to work as the Maryland assistant state attorney general. The next year (1954), he won his race for a seat in the Maryland State Senate by 37 votes. Cole served in the state senate from 1955 to 1958. His political career was not without setbacks however; he lost his seat in the 1958 election and twice in the 1950s ran for but was defeated in his attempt to win a seat on the Baltimore City Council.

Maryland Governor Spiro Agnew appointed Cole an Associate Judge for the Municipal Court of Baltimore City in 1967. That same year, he was named an Associate Judge for the Supreme Bench of Baltimore City, later called the Circuit Court, which is the highest trial court. He remained in that position until 1977 when Governor Blair Lee III appointed him to the Maryland Court of Appeals, the state supreme court. Cole retired from the Court of Appeals in 1991.

Cole fought for less fortunate citizens throughout his legal career. In his time as a judge, he upheld the state’s ability to fund abortions for poor women. He also believed in the importance of prisoners’ rights. By breaking the color barrier in political and legal positions as the first African American elected to the Maryland State Senate and later as the first black judge to serve on the Maryland Court of Appeals, he helped alter the perception of the role of people of color in law and government.

After his retirement, Cole chaired several commissions, including the Maryland Charter Review Commission, the Governor’s Commission on the Thurgood Marshall Memorial Statue, and Morgan State University’s Board of Regents. He was also a member of the U.S. National Commission for UNESCO, the American Judicature Society, the Urban League, and NAACP. In addition, he was in several bar Associations.

Cole was married to Baltimore native Doris Freeland. Their three children are Susan, Harriette, and Stephanie.  Harry Cole passed away at age 78 at Church Home, a hospital in Baltimore, Maryland, on February 14, 1999 of pneumonia.