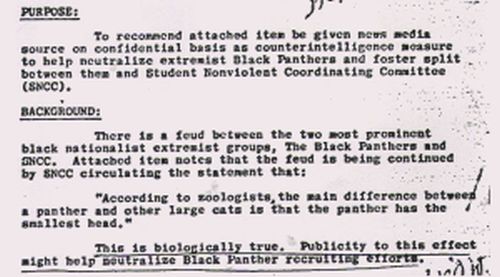 COINTELPRO was a counterintelligence program run by the Federal Bureau of Investigation (FBI) from roughly 1956 to 1976. It combined the efforts of the Bureau and local police forces to track, harass, discredit, infiltrate, destroy, and destabilize dissident groups in the United States. COINTELPRO targeted the Communist Party, the Socialist Workers Party, the American Indian Movement, those considered part of the “New Left,” the KKK, and most acutely, black civil rights and militant black nationalist groups.

J. Edgar Hoover, the director of the FBI, considered militant black nationalist groups to be the most dangerous threat facing the United States at that time due to their perceived potential to cause civil unrest and violence. The FBI’s COINTELPRO focused on the Black Panther Party, Malcolm X, the Nation of Islam, and others. COINTELPRO also sought to undermine, intimidate, and slander avowedly nonviolent black leaders such as Martin Luther King Jr.

The counterintelligence methods used by the FBI program included sending undercover agents into the Black Panther Party, where they incited criminal acts and fomented much of the violence that the public came to negatively associate with the Panthers. Other methods included planting informants, video surveillance, wiretapping, as well as phone call campaigns and false letter writing to sow intragroup discord. Indeed, COINTELPRO is suspected to have contributed to the divide that formed between Malcolm X and the Nation of Islam that resulted in his assassination in 1965.

Complete information on the origins and activities of COINTELPRO remain elusive, as participating agents are legally bound to secrecy, and the FBI retains control over most the COINTELPRO files that do exist. Due to the highly sensitive nature of COINTELPRO’s actions, many details of the program were intentionally never put into writing so that they could never later be exposed.  Some COINTELPRO files came to light in March of 1971 after a leftist group called the Citizens’ Committee to Investigate the FBI broke into a small Pennsylvania FBI office, seized documents, and disseminated them to news outlets. In 1975, the U.S. Select Committee to Study Governmental Operations with Respect to Intelligence Activities (also known as the Church Committee) helped bring other COINTELPRO activities to light, but because the committee only required the FBI to provide heavily redacted documents, its impact in exposing the truth was limited.

Jared Ball, “COINTELPRO,” Encyclopedia of African American History, 1896
to the Present: From the Age of Segregation to the Twenty-first
Century