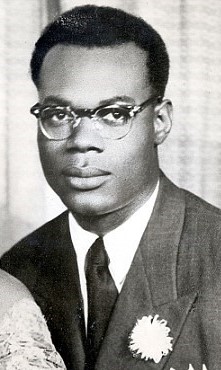 Kelso Benjamin Cochrane, one of the early victims of racial violence against West Indians in London, UK, was born on September 26, 1926, in Johnson’s Point, Antigua to Joanna Valentine and Stanley Cochrane. He was born into a working-class family and was a carpenter. At the age of nineteen, he moved to Dominica. Living there for three years, he returned to Antigua in 1948. In 1949, he then moved to the United States. In the US, he immediately began working on an agricultural labour contract in Florida. Shortly after, he met and married Kansas Green and the couple had a daughter, Josephine.

They then moved to New York City, New York to re-establish themselves but failed. In New York, Cochrane witnessed the dissolution of his marriage and faced deportation because he overstayed his visa. He returned to Antigua, spent six months there and then migrated to Great Britain in September 1954. In 1956, however, he petitioned to return to America but remained in Britain.

In Britain, Cochrane continued to work as a carpenter whilst saving to attend law school. He then met Olivia Ellington, a Jamaican nursing student and his soon-to-be fiancée. In June 1959, they planned on getting married. On May 17, three weeks before their wedding, however, Cochrane was murdered. Around midnight on May 16, Cochrane left his fiancée’s flat in Notting Hill for Paddington General Hospital to seek treatment for a thumb injury. In order to reach the hospital, Cochrane had to pass a popular pub frequented by Sir Oswald Mosley, a well-known white nationalist and staunch anti-immigrant advocate, and his supporters. From across the street, six white men shouted, “Hey, Jim Crow” at Cochrane. The men then descended upon him and stabbed him. A taxi driver rushed Cochrane to St. Charles’s Hospital where he was pronounced dead at 1:00 a.m. Cochrane’s last words were, “They asked me for money. I told them I had none.” Since the Nottingham and Notting Hill riots, in 1958, racial tensions within those areas remained high.

On June 6, 1959, Cochrane’s funeral was held at St Michael’s and All Angel’s Church in Notting Hill. As the hearse passed from the church to Kensal Green Cemetery, a crowd of 1,200 lined the streets to mourn his death. The Prime Minister of the West Indies Federation, the High Commissioner of Ghana, and Mayor of Kensington were also in attendance. In July 1959 and on 17 May 1960, the one year anniversary of Cochrane’s death, Mosley and his supporters held a “Keep Britain White” campaign meeting at the spot where Cochrane was murdered.

When Cochrane was alive, he was relatively unknown. In his death, however, his face and life story became intertwined with discussions of black rights and protest movements in Britain and the Atlantic world in the post-World War II era. On May 17, 2009, a blue plaque was unveiled at the Golbourne Bar and Restaurant, which is now “West Thirty-Six,” opposite where Cochrane was attacked, to mark the 50th anniversary of his death. Cochrane’s actual murderers, however, were never brought to justice.