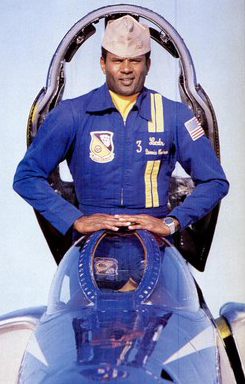 Born in Pelham, Georgia, on July 6, 1954, Donnie L. Cochran was one of the nine sons of farmers Isaac C. Cochran and Addie B. Cochran. As a child he was fascinated by planes flying close to his home and became increasingly committed to becoming a pilot and to perform aerobatics. At Savannah State University, a historically black school in Georgia, Cochran was a scholarship student in the Navy ROTC program. In 1976 he received his bachelor’s degree there in civil engineering and was commissioned a Navy ensign.

After several years of basic and advanced pilot training at Naval Air Station in Kingsville, Texas, Cochran flew photographic reconnaissance missions and was assigned fighter jet duty on the aircraft carriers USS Nimitz and USS Enterprise. Determined to fulfill his childhood dream of adventurous and exciting work, in 1984 he applied to become a pilot in the Navy’s precision flying team popularly known as the Blue Angels. Cochran’s application was rejected initially, but a year later, with nearly 2,000 flight hours to his credit, he was reconsidered and joined the team as the first African American member in its forty-year history.

He commenced team training in A-4 Skyhawk jets (later in F-18 jets) near the desert city of El Centro, California, practicing the roles, loops, dives, climbs, and tight formation maneuvers that have thrilled crowds for decades. When not practicing flight acrobatics Cochran was at his home base at Naval Air Station Pensacola or performing with the squadron in shows across the nation. During his term in the Blue Angels, Cochran moved to the number four position in the rear of the formation and tasked with training pilots in positions two and three.

Cochran was assigned to Naval Air Station Miramar in San Diego, California, then duty aboard the USS Ranger. He earned a diploma at the Air War College in Montgomery, Alabama, and he also took classes at Troy State University in Troy, Alabama, where he earned a master’s degree in human resource management. Between 1992 and 1994, he commanded three fighter jet squadrons.

In November 1994, Cochran returned for another two-year assignment with the Blue Angels but this time as the team’s first African American commander and flying in the number one position. Citing increasing safety concerns facing the team, including his own performance that he criticized as less than the 100 percent, he exited the Blue Angeles on May 28, 1996.

From 1996 to 1999, Cochran directed the Navy ROTC program at Florida A&M University in Tallahassee, Florida. Having served as Deputy Commander of Navy Recruiting Command, headquartered in Millington, Tennessee, Cochran retired in 2000 at the rank of Captain. In retirement, he worked as aviation programs manager for the Coca-Cola Company and flight engineer for United Parcel Service in Atlanta, where he later founded Enhance Performance Consulting Inc. He also established himself as a motivational speaker.

Cochran’s book, Glad To Be Here: My Lessons Learned as a Blue Angels Flight Leader and Pilot (2016), traces his unusual odyssey and career. Cochran wife Donna is a realtor; they have one son, Donnie Lee Cochran Jr.