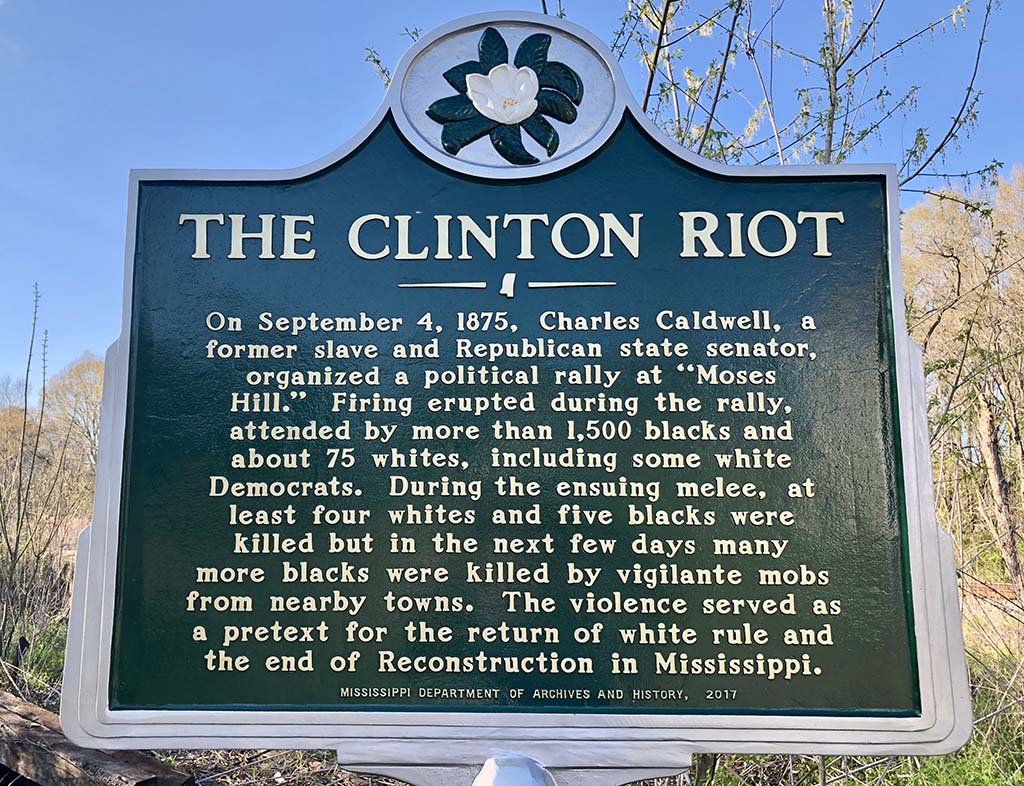 The Clinton Riot began on September 4, 1875, in the small town of Clinton, Mississippi at a Republican rally to introduce the party’s candidates who were running for political office in the upcoming November elections.  The immediate death toll included five blacks and three white men.  Over the next several days, an estimated fifty blacks were killed in the massacre that followed.

Over 1,500 black Republicans and their families gathered on the grounds of the former Moss Hill plantation for a barbecue and political rally.  Approximately 100 whites also attended, including a few Democrats from the nearby town of Raymond. In an effort to keep the political rally peaceful, alcoholic beverages and weapons were banned, and both a Democratic and Republican candidate were invited to speak.

Judge Amos R. Johnston, the white Democratic state senate candidate, gave the opening speech with no problems from the predominantly black crowd.  However, the Republican speaker and editor of the Jackson Times, Captain H.T. Fisher, was interrupted during his speech when a white Democrat in the audience called him a liar.  Shortly afterwards, shots were fired, and the crowd frantically ran in all directions to get away from the danger.  When the gunfire ended, a total of five blacks, including two children, and three whites were dead, and nearly thirty others were wounded. It was reported that a white man fired the first shot, but other rumors contended that armed black Republicans started the riot.

Later that night, white militia associated with the Mississippi Democratic party were called in from Jackson, Vicksburg, and the surrounding area for assistance against armed blacks.  The militia group, who called themselves Modoc after an Indian tribe in California, began a manhunt for blacks in Clinton.  The following days were marked by violence and bloodshed as the white mob indiscriminately shot and killed nearly fifty blacks in Clinton and the surrounding area.

Many blacks fled to Jackson seeking the protection of Republican governor Adelbert Ames, while others hid out in the woods to escape the terror.  Although Governor Ames requested federal troops to assist in restoring order, President Ulysses Grant denied the request on September 14 and adopted a policy of non-intervention, leaving Ames and the local black and white Republicans without protection.

The Clinton Riot, and other race riots, were part of white Democrats’ efforts to regain political power in the November 1875 election at the end of Reconstruction in Mississippi.