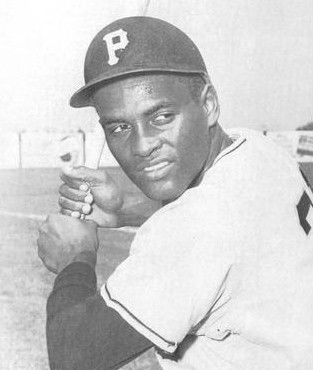 Roberto Clemente (Walker) was considered one of the leading right fielders in baseball; he was well known for his selfless dedication to providing aid to Latin American people in need.

Clemente was born on August 18, 1934, in Barrio San Antón in Carolina, Puerto Rico, the youngest of four children, and at a very early age developed an affinity and talent for playing baseball.  At 17 he began to play for the Santurce Cangrejeros in the Puerto Rican Winter Baseball League.  In the winter of 1953, he was discovered by the Brooklyn (New York) Dodgers and signed to a $10,000 a year contract. After a year in the minor league, the Pittsburgh (Pennsylvania) Pirates purchased Clemente’s contract from the Dodgers, and he played for the Pirates for the next 18 seasons.

Clemente was a fantastic hitter and fielder, possessing one of the strongest and most accurate arms in the history of the game.  Although he was subject to racial discrimination from both fans and fellow players, his quality of play and strength of character, similar to that of Jackie Robinson and other pioneer black baseball athletes, changed the way African Americans were treated in MLB.  Among his many Major League Baseball (MLB) achievements were twelve Gold Glove Awards, twelve All-Star Games, the 1966 National League (NL) MVP, the 1971 World Series MVP, and four-time NL batting champ.  Roberto Clemente got his 3,000th hit on the last day of the 1972 season in his last game.

In addition to his love of baseball, Clemente’s passion was using his wealth and influence to provide opportunity and hope to the underprivileged in Puerto Rico and throughout Latin America.  He maintained a home in Puerto Rico and insisted that all his children be born on the island.  He also worked to create the 304-acre sports complex in his hometown of Carolina, Puerto Rico that now carries his name, Roberto Clemente Sports City.

“I am from the poor people,” he said. “I represent the poor people. I like people that suffer because these people have a different approach to life from the people that have everything and don’t know what suffering is.”  Clemente died in a plane crash in 1972 while attempting to personally deliver supplies to victims of a recent earthquake in Nicaragua.  Major League baseball waived the mandatory five-year waiting period for the Hall of Fame and inducted Clemente in 1973.  He was the first Hispanic player ever inducted in the Baseball Hall of Fame.  Since his death, MLB has annually presented the Roberto Clemente Award to the player whose character, community involvement and philanthropy best exemplify baseball and Clemente’s humanitarian legacy.