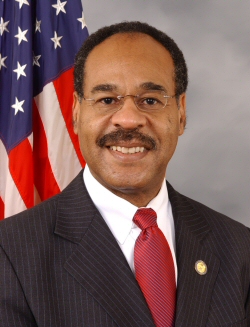 Reverend Emanuel Cleaver II, born in Waxahachie, Texas in 1944, is best known as the first African American mayor of Kansas City, Missouri.  Cleaver, who grew up in a public housing project in Wichita Falls, Texas, graduated from Prairie View A & M University in Texas with a B.S. in Sociology in 1968.  After graduating from Prairie View he moved to Kansas City where he founded a local chapter of the Southern Christian Leadership Conference (SCLC).  He also received an M.A. in Divinity from St. Paul’s School of Theology in Kansas City and became pastor of the St. James United Methodist Church in Kansas City where he built the congregation from 47 members to more than 2,000.

Cleaver was first elected to public office in 1979 as a City Councilman in Kansas City. He remained on the Council for twelve years before running for mayor in 1991.  Cleaver won and served as mayor until 1999.  After leaving office he served briefly in the Clinton Administration as Special Urban Advisor to Secretary of Housing and Urban Development, Andrew Cuomo.

During his time as a mayor for Kansas City, Cleaver was recognized for stimulating economic growth, improving the city’s infrastructure, and creating youth outreach programs to combat crime. Shortly after his tenure as mayor ended, the city honored him by designating one of its major thoroughfares as “Emanuel Cleaver II Boulevard.”

In 2005 Rev. Cleaver, a member of Sigma Pi Phi and Alpha Phi Alpha Fraternities, won the congressional seat for the Fifth District of Missouri which includes Kansas City.  He remains in the U.S. House of Representatives.  Rev. Cleaver also still serves as Senior Pastor at St. James United Methodist Church in Kansas City.