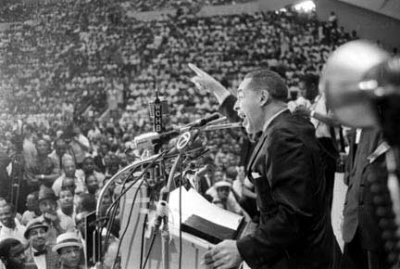 Albert Cleage, jr., or Jaramogi Abebe Agyeman, Black Nationalist and civil rights activist, was one of the most prominent black religious leaders in America. Agyemen preached a form of nationalism within the black community that stressed economic self-sufficiency and separation that relied on a religious awakening among black people.

Albert Cleage, Jr. was born in Indianapolis, Indiana on June 13, 1911.  Cleage graduated from Wayne State University in Michigan in 1937, earning a B.A. in sociology, and a M.A. in Divinity from Oberlin School of Theology in 1943.  Cleage married Doris Graham and had two daughters. Cleage and Graham later divorced in 1955.  Cleage ran for governor of Michigan in 1962 under the Freedom Now Party, and was a candidate in the Democratic primary for U.S. Representative from Michigan, 13th District, in 1966. Cleage later changed his name to Jaramogi Abebe Agyeman.

His most recognized work was the Black Messiah (1968).  In Messiah, Agyeman argued that Jesus was a black revolutionary who sought to lead a “Black Nation” to freedom. Agyeman believed the emergence of nationalist movements of the world’s colored majority would reveal the historic truth that Jesus was the “non-white leader of a non-white people struggling for national liberation against the rule of a white nation, Rome.”  Agyeman understood the power of the church within the black community and thought the re-orientation from a “white” Jesus to a “black” Jesus would be a necessary step in the spiritual liberation of black America.  Some believe the basis of Agyeman’s spiritual teachings was based on the theology rooted in Robert Young’s Ethiopian Manifesto (1829).

In 1967 Agyeman unveiled the portrait of the Black Madonna.  He went on to found and lead the Pan African Orthodox Church, which was part of the Black Christian Nationalist Movement.  This nationalist movement had 50,000 members nationwide.