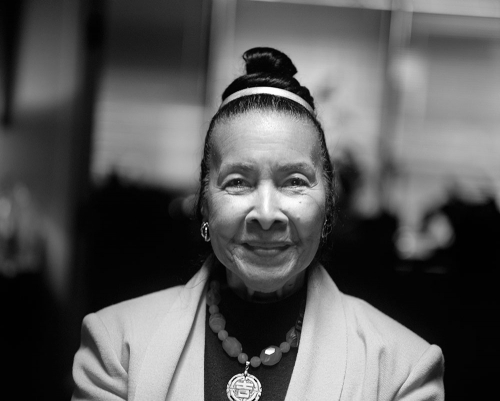 Xernona Clayton, a civil rights activist and the first woman to host a television show in the South, was born to James and Lillie Brewster in Muskogee, Oklahoma on August 30, 1930. Her father was a respected Baptist minister and both her parents managed Indian affairs in Oklahoma. Lillie was a quarter Cherokee, and as administrators of Indian affairs, she and James worked with disadvantaged Native Americans. She has three older half siblings, an older brother, James, and an older sister, Vera, and a twin sister, Xenobia.

Xernona and Xenobia attended Tennessee State University and graduated in 1952. That summer, they moved to Chicago where the Urban League employed them as undercover agents, working to determine discriminatory hiring practices. Xernona received a scholarship for graduate work at the University of Chicago. While in Chicago, she also taught elementary and high school in the public school system.

It was also in Chicago that Xernona met her first husband, Ed Clayton, who was Jet’s executive editor at the time. They married in 1957, and in 1960, they moved to Los Angeles. There, she played an active role in political campaigns. While in Los Angeles, after hearing an announcement from President John F. Kennedy requesting people to volunteer their time to help less fortunate citizens, she organized a group to mentor roughly one hundred high school dropouts, eighty of whom returned to school and graduated. This was one of many instances over her career where Clayton reached out to struggling teenagers and young adults.

The Claytons moved to Atlanta in 1965 at the request of Martin Luther King, Jr., but the next year, Ed Clayton died suddenly. Xernona and Ed had worked at the Southern Christian Leadership Conference (SCLC) which gave her the opportunity to become close friends with the King family.  She helped plan the funeral for Dr. Martin Luther King following his assassination in 1968.

Xernona was politically and civically active in Atlanta, Georgia. In 1966 she helped organize the Doctors’ Committee on Implementation which helped desegregate hospitals in Atlanta. In 1968, she worked for Model Cities, the federal program associated with the War on Poverty. While there she met Calvin Craig, the Grand Dragon of the Georgia Ku Klux Klan. After many conversations with her regarding race, Craig remarkably decided to leave the KKK, crediting his change of heart to Xernona.

After pointing out the absence of African Americans on television in Atlanta, Clayton was hired by WAGA-TV, the CBS affiliate in the metropolitan region, to be the hostess of Themes and Variations. The show was named after a column Clayton wrote for the Atlanta Voice. At the first anniversary of the show, it was renamed The Xernona Clayton Show. The show, which aired from 1968 to 1975, made her the first on-air television personality in the South.

When Turner Broadcasting was founded in 1979, Clayton went to work for the new cable TV network.  She had a career there spanning three decades. Her last and most prestigious role was as Corporate Vice President for Urban Affairs. In 1993, Clayton founded the Trumpet Awards Foundation, Inc. to recognize accomplishments of African Americans. She served as the first president and CEO of the organization.

Xernona Clayton lives in Atlanta and is married to Judge Paul L. Brady.  She continues her involvement in the city’s civic affairs and especially with Ebenezer Baptist Church, the church Dr. Martin Luther King and his father led for decades in Atlanta.