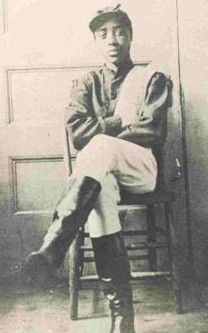 Alonzo “Lonnie” Clayton reached stardom at the age of fifteen, when he became the youngest rider to win the Kentucky Derby. He was born on March 27, 1876, in Kansas City, Missouri to Robert and Evaline Clayton.

Alonzo Clayton moved with his parents and eight siblings to North Little Rock, Arkansas at the age of ten.  His father, Robert Clayton was a carpenter while his mother, Evaline Clayton stayed at home with the children.  In North Little Rock, Alonzo attended school and worked as a hotel boy and a shoeshine boy to help support his family.

At age twelve, Clayton started his riding career when he ran away from home to follow his brothers’ footsteps as a jockey.  He landed a job with Lucky Baldwin’s Stable in Chicago as an exercise boy.  One year later, he was riding and competing in races on the East Coast.  At fourteen, he raced in New York City at Morris Park and in the Jerome Stakes, where he recorded his first win in a major race.

On May 11, 1892, Clayton rode in and won the Kentucky Derby where he recorded a time of 2:41.50.  Riding Azra, he also set a record as the youngest rider to win the prestigious race.

By 1900 Clayton’s career began to decline.  He tried a comeback in 1904, but he was arrested for allegedly fixing a race in New York.  Although all charges were dismissed, his career was over.

Clayton retired to Little Rock, Arkansas in 1904. He he bought a prominent home, now known as the Engelberger House, which is listed on the National Register of Historic Places.

Clayton lived his final years in California and died on March 17, 1917 from chronic pulmonary tuberculosis.  He is buried at the Evergreen Cemetery in Los Angeles, California.