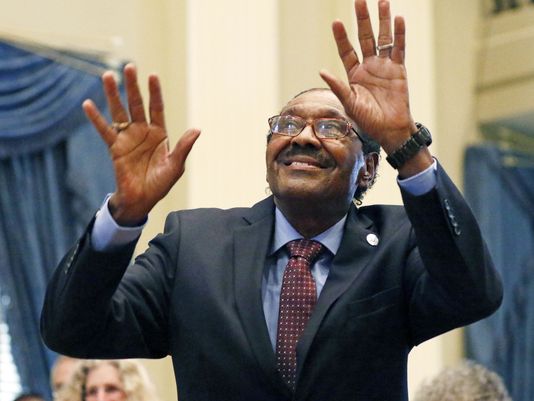 Clark was born October 3, 1928 to Robert and Julia Anne Clark of Ebenezer, Mississippi, the youngest of three children. He attended Holmes County Training School in Durant, Mississippi and later received his B.A. from Jackson State University in 1952. In 1959, he earned a Master’s Degree in Administration and Educational Services from Michigan State University.  In 1979 while in the Mississippi state legislature, Clark served as a teaching fellow at the John F. Kennedy School of Government at Harvard University.

After earning his B.A. degree, Clark worked as a teacher in Holmes County. His first experience in politics was running for and winning an elected board position in Holmes County Community Action Program (CAP) in 1966.  In 1967, he agreed to run for state legislator on Holmes County’s Mississippi Freedom Democratic Party (MFDP) ticket. He won the election and became the first black person elected to the Mississippi House of Representatives since Reconstruction.

Clark’s election signaled the emergence of black electoral politics in Mississippi. As late as 1964 only ten black people were registered to vote in Holmes, though the county was roughly 75 percent African American. By 1967, the black community of Holmes County built one of the strongest and most sophisticated political organizations in the state.

Ten years after he was first elected, Clark became the first black committee chairman in the Mississippi House of Representatives when he was named to head the Education Committee.  During his term as chair, the legislature passed the 1982 Education Reform Act and the 1984 Vocational Education Reform Act.  The 1982 act significantly reformed Mississippi’s educational system, helping to modernize school classrooms and other physical facilities, replace worn-out text books and purchased replacement school buses.

In January 1992, Clark was elected as Speaker Pro Tempore, serving in that post until 2000. When he retired from the Mississippi House of Representatives in December 2003, he was the longest-serving member in continuous House service. He was succeeded in office by his son, Bryant Clark.