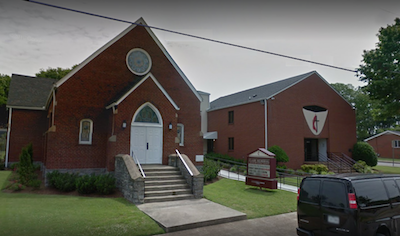 Clark Memorial United Methodist Church is the oldest black United Methodist Church (UMC) in Nashville, Tennessee. In 1865 the Methodist Episcopal Church sent Bishop Davis W. Clark to Nashville to reorganize the Negro mission at Andrew Chapel, located on Franklin Street in South Nashville. The church’s name was changed to Clark Chapel and would undergo several name changes in keeping with denominational changes and Bishop Clark’s death in 1871. Initially, the church was racially integrated.

In the same year that Bishop Clark came to the church, later named Clark Chapel, he became the first president of the Freedman’s Aid Society that established the society’s first school in the basement of the church. The school experienced so much growth and success that it had to move. It became Central Tennessee College and later changed to Walden University. Meharry Medical College began as a department at Walden in 1876, before becoming an independent institution in 1915.

By 1868, the white members of Clark Chapel had left, and the Negro mission took over the building and land. In 1899 a new structure was completed and dedicated, with the name changed to Clark Memorial Methodist Episcopal Church. Eventually, the members sold this property, and in 1936 they moved to north Nashville, temporarily worshipping in the Seventh Day Adventist Church on the corner of Meharry Boulevard and the 12th Avenue North, until its own facility could be built. On March 25, 1945, the congregation marched from the Seventh Day Adventist Church to its present location on the corner of Phillips Street and 14th Avenue North.

At this site, Clark has expanded over time. In 1956 the church added an educational building, with an adjacent parsonage completed a year later. Once again the church would need to physically expand because of congregational growth. In 1981 the educational wing was expanded, renovated, and dedicated as the Grady Sherrill-Matthew Walker wing, with the cornerstone of the old Franklin Street Church included in the structure. Dr. Matthew Walker Sr. was a trustee at Clark, as well as a professor at Meharry Medical College and founder of the Matthew Walker Health Center. Some of his children participated in the Nashville Sit-In Movement in the early 1960s.

Partly because of that connection, Clark was one of the frequent meeting spaces during the civil rights movement. In 1958 while preparing for the Nashville Sit-Ins, James Lawson hosted non-violent protest workshops at Clark for Nashville college students. September 28-29, 1961, Dr. Martin Luther King Jr. hosted the annual Southern Christian Leadership Conference (SCLC) meeting at Clark. The church still stands today and continues to be a thriving ministry in the community of North Nashville.