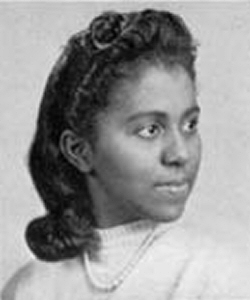 Marie Maynard Daly, born in Queens, New York to Helen and Ivan Daly, was the first black woman to earn a Ph.D. in Chemistry. Her father, an immigrant from the West Indies, had hoped to earn a degree in Chemistry at Cornell University but was unable to continue because of financial constraints. Marie Daly’s parents were committed to her education and encouraged her interest in science. She attended Hunter College High School where her teachers persuaded her that she could do well in chemistry.

Daly enrolled in Queens College so that she could live at home. She earned her B.S. in 1942 with honors. A fellowship and part-time job at Queens College allowed her to work on her master’s degree at New York University, which she completed in 1943. Because of the shortage of male scientists during World War Two, Daly was awarded funding for her Ph.D. program at Columbia University where she studied under a white female chemist, Mary L. Caldwell. She completed her dissertation in 1947.

Daly earned an apprenticeship with Dr. A.E. Mirsky at the Rockefeller Institute but she was required to find her own funding source. She applied for and won a grant from the American Cancer Society and began working with Dr. Mirsky in 1948. The two worked together for seven years studying how proteins are built inside the body.  n 1955, she moved back to Columbia and worked with Dr. Quentin B. Deming researching the chemical mechanics of heart attacks. In 1960, the two moved to Albert Einstein College of Medicine at Yeshiva University where she taught biochemistry courses and studied the effects of age on the circulatory system. Daly was awarded tenure in 1971.  In 1961 Marie Daly married Vincent Clark.

At Albert Einstein, Clark became a champion for diversity, working to increase the representation of minorities in science.  She retired in 1986. Dr. Clark was made a fellow of the American Association for the Advancement of Science and was named one of the Top 50 Women in Science, Engineering, and Technology by the National Technical Association in 1999.  Marie Maynard Daly Clark died in New York in 2003.