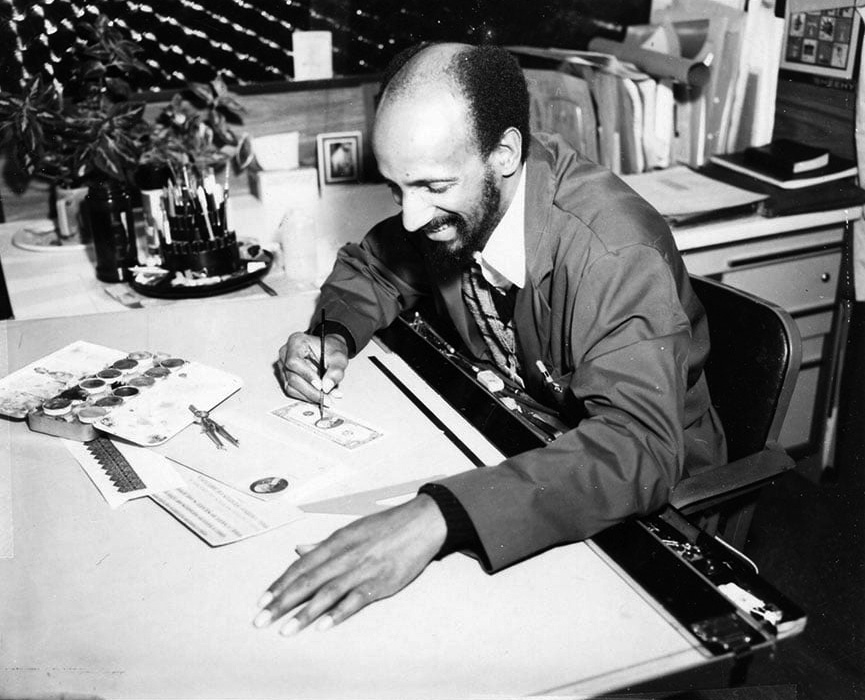 Clarence Holbert is best known as the chief designer of Eritrea’s currency and the second African American engraver to work at the US Bureau of Engraving and Printing. Born in Rutherfordton, North Carolina, Holbert was raised in Washington D.C.’s Northeast neighborhood of Ivy City. Though he spent most of his childhood doodling and drawing the scenery for school plays, Holbert further developed his artistic talent during military service and as an art student.

In 1968, Holbert attended Federal City College while working as a security guard for the Bureau of Engraving and Printing. During long shifts, he left doodles around the workplace, eventually gaining a reputation among his coworkers. When an engraving apprenticeship at the Bureau became available, Holbert was offered the position. Working under the tutelage of his mentor, Ronald Sharp, Holbert became adept at designing banknotes, becoming the nation’s second African American currency designer. In his new role, Holbert gained recognition for designing stamps, Purple Hearts, White House invitations, and ID cards for the CIA and FBI.

In 1994, Eritrea requested Holbert’s expertise in designing the newly independent nation’s currency. After receiving the request, Holbert went to Howard University and made four separate trips to Eritrea to conduct research for the project. From his research, he learned his design should not include government officials or depictions of war. He decided to keep the bill sizes uniform so that Eritreans would read them, thereby improving the nation’s dwindling literacy rates. To come up with his design, Holbert studied hundreds of photographs of Eritrea, from children studying, to camels grazing in vast landscapes. He submitted his sketches in September 1996. After reviewing his work, Eritrean President Isaias Afwerki, and his cabinet informed Holbert that his designs unintentionally included faces from each of Eritrea’s distinct ethnic groups. The Eritrean President and cabinet accepted the design.

The nakfa, Eritrea’s currency, which debuted in 1997, is named after the site of the first major victory in Eritrea’s War of Independence. Holbert’s work was extremely personal for the citizens of Eritrea, whose memories of war were still fresh. Holbert’s design celebrates the beauty and resilience of Eritrean women who are depicted on many of the bills. Making up 30% of the resistance fighters, Eritrean women played a major role in the movement for independence. Holbert’s money imbued the nation with a sense of national pride and formalized their hard-earned separation from Ethiopia.

After designing the nakfa, Holbert retired. He refused an academic position offered by the Eritrean government geared toward training other artists. Instead, he became deeply involved in his church, was ordained, and served as a minister the remainder of his life. In 2018, at age 73, Holbert died of pancreatic cancer. At his memorial service, his family placed a nakfa in his pocket, stating he believed it to be one of his proudest achievements.