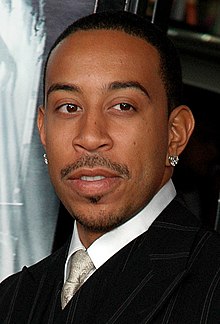 Christopher Brian Bridges is a rapper, actor and three-time Grammy award winner best known under the stage name Ludacris. Bridges was born On September 11, 1977, in Champaign, Illinois to Roberta Shields and Wayne Brian Bridges. He began rapping at the age of nine, and joined the amateur rap group, Loudmouth Hooligans when he was twelve. Bridges went to multiple schools in his youth.  He attended Emerson Middle School in Oak Park, Chicago; Centreville High School in Centreville, Virginia; and Banneker High School in Atlanta, Georgia, from where he graduated in 1995. He briefly studied music management at Georgia State University (1998-1999).

Bridges started out in the music industry as a DJ, using the name “Chris Lova Lova” for Atlanta’s Hot 97.5 (now Hot 107.9). He changed his stage name to “Ludacris” after his self-described personality of ridiculous. Before Bridges released his own album, he partnered with musician and producer Timbaland on his first album with the track “Phat Rabbit.” He then formed his own record label Disturbing tha Peace in 1998 and released his first album, Incognegro in August 1999.  The debut single, “What’s Your Fantasy,” peaked at No. 21 on the Billboard Hot 100 chart and landed a record deal with Def Jam South. Bridges’ second album, Back For The First Time, was certified triple platinum, selling three million units worldwide.

His third album, Word of Mouf, released in 2001, has been the rappers most successful one, reaching a 3X multi- platinum status, with well over three million copies sold worldwide. Chicken-n-Beer (2003), and The Red Light District (2004), his fourth and fifth albums have both been certified double platinum, with over two million copies sold. The Red Light District was accompanied by a 41 minute DVD of Bridges visiting the Red Light district in Amsterdam, as well as other locations associated with the theme. Release Therapy (2006) had two sides- a Release Side, and a Therapy Side. Theater of the Mind (2008) and Battle of the Sexes (2010), have both been certified gold (500,000 units sold), not reaching quite the success of his earlier albums. Bridges released the mixtape #ISGAF (2013) and EP “Burning Bridges” (2014) ahead of his ninth album, Ludaversal (2015).

Bridges has received forty one nominations and won twelve awards in numerous categories to include Grammy, BET and CMT (Country Music Television) awards.  He branched into film in the movie The Wash (2001), and has appeared in numerous films, including five out of the eight widely successful Fast and Furious films. He has also appeared in television shows including two episodes of Law &Order: SVU. In 2002, Bridges founded The Ludacris Foundation and in 2009, he co-founded Conjure Cognac. He released his own line of headphones in 2011, called “Soul by Ludacris,” and opened the restaurant “Chicken N Beer” in the Hartsfield-Jackson International Airport in Atlanta, Georgia in 2016.

Bridges has four children, Karma, Cai Bella, Shaila, Cadence, and as of this writing, is expecting a fifth child with wife Eudoxie Mbouguiengue. The two got engaged and married on the same day in Costa Rica in December 26, 2014. In January 2020, Bridges shared he now has citizenship in Gabon, Africa, his wife’s native country. He is a distant cousin of the singer, Monica, comedian Katt Williams and Richard Pryor.