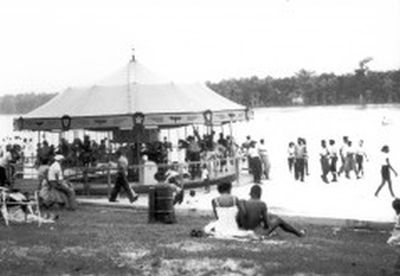 Chowan Beach was an African American playground founded in 1926 when Eli Reid of Winton, in Hertford County, North Carolina, converted an abandoned fishing beach along the Chowan River into a family-oriented resort for African Americans. The area was originally settled in the Colonial era but the ravages of the American Revolution and later the U.S. Civil War eventually broke the linkage to the original settlers.  By the mid-1920s when Reid acquired the land from Hertford County, the old fishing village, the last known settlement, had long been abandoned.

Under Reid’s ownership Chowan Beach became a place of quiet dignity where middle class African Americans could vacation for a day or a week.  Reid, a World War I veteran and trustee of First Baptist Church of Winton, used his veterans and church connections to attract the first visitors. Many of those visitors would continue to return to Chowan Beach for the next four decades.  In the 1920s and 1930s the area’s sandy beaches were the main attraction.  By the 1940s, Reid built guest cottages, bathhouses, and a dance hall to accommodate a growing number of regular visitors.  By the end of World War II Chowan Beach had taken on the trappings of a small community with a restaurant, public picnic area, and photo studio.

Located on the Chowan River near Albemarle Sound, Chowan Beach was a four hundred-acre gathering place and destination for middle class African Americans during the segregation era when vacation opportunities were limited. Over the years Reid welcomed a long list of vacationers from throughout North Carolina and Virginia including bankers, insurance company executives, dentists, medical doctors, surgeons, optometrists, attorneys, business managers, engineers, secondary school educators, and college professors from many of the historic black colleges in North Carolina and Virginia.

During the late 1940s and 1950s, Chowan Beach became a major stop on the Chitlin Circuit, attracting leading black musicians including headliners such as B.B. King, James Brown, Ruth Brown, The Coasters, Joe Turner, Little Willie John, Louis Jordan, and Sam Cooke. However, like other black resort communities that faded after President Lyndon Johnson signed the Civil Rights Act of 1964 into law, the number of vacationers and entertainers rapidly declined.

In 1967, Reid sold Chowan Beach to Sam Pullman, a respected businessman from Ahoskie, North Carolina, who made a number of improvements to the resort.  Pullman managed to keep the resort alive during the 1970s and 1980s although it never saw the number of visitors so common in the 1950s and early 1960s.  By the 1990s, however, competition from newly opened amusement parks in nearby Virginia Beach, Virginia severely crippled attendance.

Pullman sold the property in 2004.  Now only a handful of permanent residents live in Chowan Beach behind a private gated road.