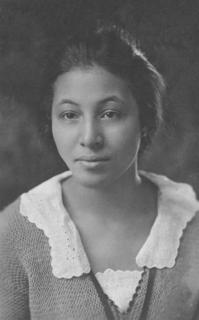 May Edward Chinn, 1917
Public domain image
This entry is sponsored by Joyce Taylor

May Edward Chinn is renowned for her work in medical research. In 1926 she became the first African American woman to graduate from Bellevue Hospital Medical College (now NYU School of Medicine). She was born on April 15, 1896 to William Lafayette Chinn and Lulu Ann Evans in Massachusetts. Chinn’s mother eventually worked for the Tiffany family of jewelers in New York City, New York. The close relationship that her mother had with her employers helped provide May a strong educational and cultural experience especially in music. In the 11th grade, however, Chinn dropped out of school and never earned a high school diploma.

The lack of an official diploma did not stop Chinn from applying for admission into the Columbia Teachers College, where she first studied music. The racist remarks of her music teacher led her to change her major to her second love, science. In 1921, May Edward Chinn was awarded her Bachelor of Science degree while working full time as a medical laboratory technician. Her love of medicine led her to study at Bellevue Hospital Medical College. She graduated from that institution in 1926. Following graduation, Chinn completed her internship at Harlem Hospital, also becoming the first African American woman to do so and would later become the first African American woman to be granted hospital privileges at Harlem Hospital.

With her last name being of Asian influence, and her skin being of a lighter color, many people believed Chinn to be of Chinese descent. If this were true, it would have drastically helped her career. For instance, under the assumption that she was Chinese, Chinn was offered a fellowship position at Rockefeller University, however this offer was withdrawn when they learned of her African heritage. These discriminatory practices in the health care field limited Chinn’s prospects of working in a hospital, so she opened her own practice. Here she developed a curiosity surrounding cancer detection, having seen far too many elderly patients with that diagnosis which was usually a death sentence. The same practices that limited Chinn’s work in the medical field also hampered her access to research information about her patients. To learn more about the procedures being used, and thus furthering her research, Chinn went with her patients to their medical appointments. Her experiences in medicine prompted her to return to school and earn a master’s degree in public health from Columbia University in 1933.

Following her graduation from Columbia, Chinn began working with medical researcher George Papanicolaou, who was working on a test for cervical cancer screening that is now called the Pap Smear. In 1944, Chinn accepted a position at the Strang Cancer Clinic’s Tuesday afternoon clinic and later accepted a staff position at their New York Infirmary where she remained until her retirement in 1974. During her tenure at this Strang Cancer Clinic, Chinn pushed for research in advance cancer screenings and developed the protocol for cancer probability predictions using family medical history.

For her work in cancer detection, May Edward Chinn was also awarded membership into the New York Academy of Sciences in 1954, referenced by the New York City Cancer Committee of the American Cancer Society in 1957, and was awarded an honorary doctorate by Columbia University in 1980. She also helped found the Susan Smith McKinney Steward Medical Society.

May Edward Chinn never married and had no children, though she became godmother to many. She passed away on December 1, 1980 in New York City at the age of 84.