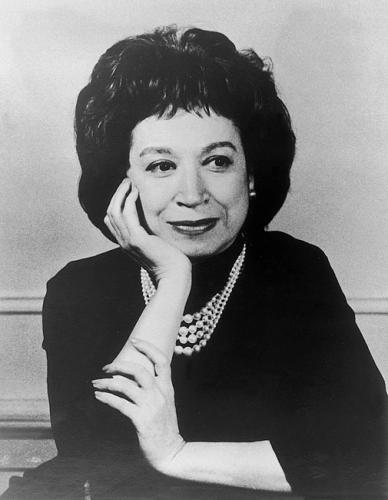 Alice Childress, playwright, novelist, actor, and screenwriter, was born Alice Herndon in Charleston, South Carolina.  Her parents separated in 1925 and Childress moved to the Harlem, New York home of her grandmother Eliza Campbell White, who encouraged her to write and exposed her to the arts.  Leaving high school after only two years, Childress worked low-paying jobs while becoming involved in the Harlem theatre scene.  In the 1930s, she married and divorced Alvin Childress, an actor, and they had a daughter, Jean R. Childress.  Childress married musician Nathan Woodard in 1957.

In 1941, she joined Harlem’s American Negro Theatre (ANT) where she worked as an actress, stage director, personnel director, and costume designer for 11 years.  While at ANT, she fought for union off-Broadway contracts that would assure advanced pay for actors.  A respected performer, Childress appeared in a variety of New York productions, including Natural Man (1941), Rain (1948), and The Emperor’s Clothes (1953).  Anna Lucasta (1944) transferred to Broadway and earned Childress a Tony Award nomination.

In 1949, she wrote her first play, Florence.  This early play reflects many themes that would characterize Childress’s later writings, including black female empowerment, interracial politics, working-class life, and attacks on black stereotypes. With the Off-Broadway union performances of Just a Little Simple (1950) and Gold through the Trees (1952), Childress became the first professionally produced black female playwright.  At the end of the 1955-1956 Off-Broadway season, Trouble in Mind won an Obie Award for Best Original Play, making Childress the first black woman to be awarded the honor. By the end of her career, she had written over a dozen plays.

One of her most famous works, A Hero Ain’t Nothin’ but a Sandwich (1973) helped launch her career as a young adult novelist. The novel confronts difficult social issues, such as racism, drug use, teen pregnancy, and homosexuality.  She adapted her novel into a screenplay in 1978. Childress wrote two other young adult novels as well as an adult novel and collection of short stories.

Occasionally, her writings on black culture and interracial relations caused controversy. Some networks refused to televise a 1969 production of Wine in the Wilderness and the Public Theatre’s 1973 production of Wedding Band: A Love/Hate Story in Black and White.  Some school districts and libraries banned A Hero Ain’t Nothin’ but a Sandwich after it was released.

Before her death in 1994, Childress received various awards and grants, including a Rockefeller grant, a graduate medal from the Radcliffe Institute for Independent Study, the Radcliffe Alumnae Graduate Society Medal for Distinguished Achievement, and a Lifetime Career Achievement Award from the Association for Theatre in Higher Education (ATHE).