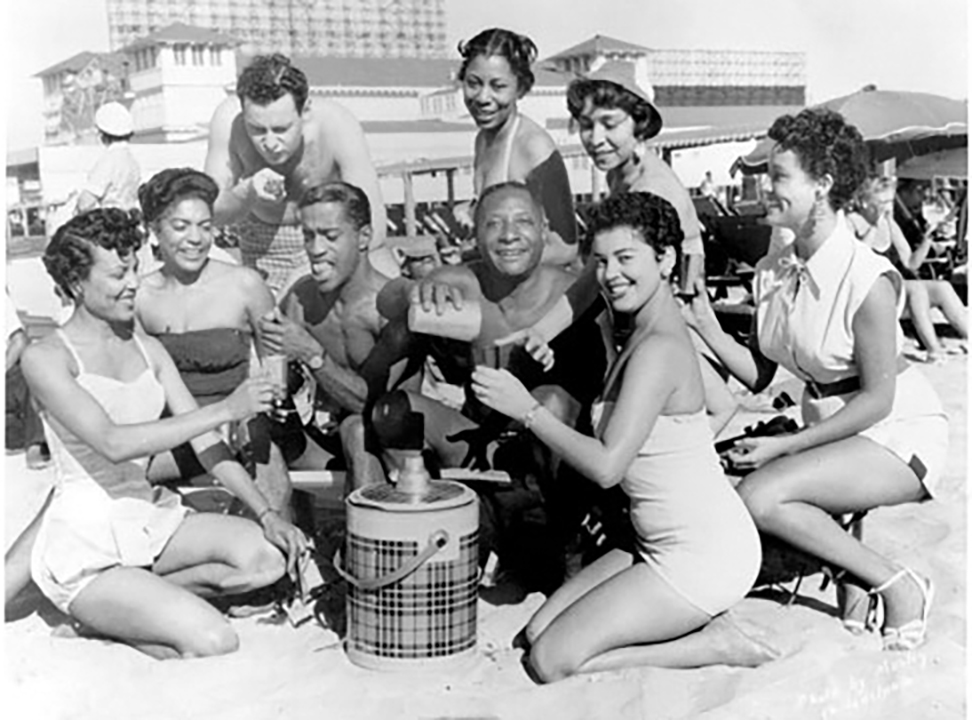 Located on the long stretch of the Atlantic City, New Jersey, shoreline just south of downtown, Chicken Bone Beach was designated as the exclusively African American section of beach around 1900.  It remained a blacks only beach until the 1964 Civil Rights Act was passed.  During the segregation era, the beach provided recreation and later stellar entertainment for African Americans, both tourists and local residents.  Ironically, before 1900 blacks and whites in Atlantic City lived side-by-side and African Americans used the beaches without restriction.  By 1900 hotel owners pushed black beach-goers from the fronts of their establishments down to the Missouri Avenue beach south of the Million Dollar Pier.  This move was done to appease a growing number hotel guests from the Jim Crow South.

Despite the glitz of headline entertainers and showgirls, Chicken Bone Beach remained a family-oriented beach which served the needs of working class Atlantic City.  Family members, friends, and neighbors cared for all the children who spent the day at the beach while their parents worked in the tourist industry.

The nickname, Chicken Bone Beach, derived affectionately from the tradition of the thousands of vacationing families who flocked to the shore bringing beach balls, umbrellas and blankets for ocean-side fun and picnic baskets with fried chicken and other delights for seaside dining.  When they finished eating, they buried the chicken bones in the sand.

With the passage of the 1964 Civil Rights Act, all Atlantic City beaches were open to everyone and this all-black beach disappeared.  By the 1970s Casinos further changed the culture of the beach by making Atlantic City into a world class resort which in turn limited access to all working class families. To protect this endangered African American heritage site, the Atlantic City Council passed an ordinance in 1997, declaring Chicken Bone Beach (also known as the Missouri Avenue Beach) into an historical landmark.

Today, the Chicken Bone Beach Historical Foundation promotes heritage pride through annual summer jazz concerts including the Chicken Bone Beach–Jazz on the Beach Concert Series that commemorates the era’s earlier block party atmosphere. For nearly two decades concert series have occurred at the Kennedy Plaza stage on Boardwalk between Mississippi and Georgia Avenue in July and August, presented by the foundation and the Atlantic City Free Public Library, along with other partners.