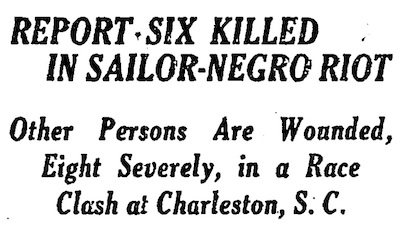 The race riot of Charleston, South Carolina in 1919 was a part of a series of race riots that year, known as the “Red Summer.” The migration of blacks out of the south, the end of World War I, the Bolshevik Revolution in Russia, the illness and near incapacity of President Woodrow Wilson, and the 1918 influenza epidemic that killed more than 600,000 in the United States led to widespread social instability. These events lead to fears of social and political upheaval which contributed to racial tensions and violence as whites sought scapegoats and blacks, emboldened by their own progress, sought to defend their rights.

At the time the riot, Charleston was a city of 80,000, more than half of whom were black. On the evening of May 10, 1919, a black man allegedly pushed Roscoe Coleman, a white Navy sailor, off the sidewalk. A white crowd of sailors and civilians gave chase to the man, who had escaped to a nearby house. A scuffle ensued where both sides threw bricks, bottles, and stones, until four shots were fired into the air by a black man to disperse the crowd. Rumors immediately began to circulate of a sailor “shot by a Negro.”

Rioting by white sailors, civilians, and a few soldiers and marines soon began, the multiplicity of the crowd makeup adding further chaos and hysteria to the scene. A mob of sailors stole rifles from nearby gun clubs and began shooting blacks indiscriminately while robbing and vandalizing black-owned businesses along the way. Blacks fought back using firearms of their own. The rioting continued until around 3:00 a.m. when Charleston’s mayor requested a detachment of U.S. Marines to restore order. In all, five white men and 18 black men were seriously injured, and three black men, William Brown, Isaac Doctor, and James Talbot, died of gunshot wounds.

The subsequent Navy investigation stands as one of the very few official documents regarding white racial violence during the era where the white perpetrators were named and their crimes identified. The report found sailors Ralph Stone, George W. Biggs, Roscoe Coleman, Robert Morton, and white civilian resident Alexander Lanneau were responsible for “stirring up strife and inciting others to violence against the negroes.” In addition, it found Jacob Cohen and George T. Holliday, both sailors, jointly responsible for the death of Isaac Doctor. Finally, it declared that “all property damage,” save a poolroom, and “all injuries to negro men…was caused by the unlawful actions of mobs, which in all cases were comprised principally of sailors.”

However, typical of white mob violence in the United States at the time, very little punishment was meted out. Despite the thorough and objective investigation and its naming of culprits, and despite the Navy’s full authority to hand out harsh sentences then standard for misconduct, Cohen and Holliday received only one year in military prison as punishment and no other sailors, soldiers, marines or civilians were convicted of any unlawful acts.