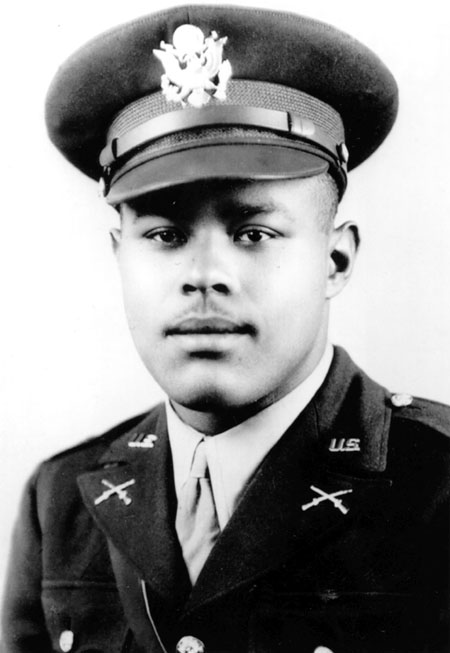 On January 13, 1997 Lieutenant Charles L. Thomas was awarded the Medal of Honor for “heroism in action” in Climbach, France during World War II. born on April 17, 1920 in Birmingham, Alabama. Thomas’s family relocated to Detroit, Michigan as part of the Great Migration. Throughout childhood, Thomas displayed an interest in both planes and electronics. As a youth, he attended and eventually graduated from Cass Technical High School in 1938. Afterward, he secured a position working alongside his father at the Ford River Rouge factory. In addition to work, Thomas also attended Wayne State University where he studied mechanical engineering. In January 1942, Thomas’s work and academic careers were cut short because he was drafted into the United States Army.

After his induction, Thomas embarked upon a distinguished military career. After successfully completing basic training, he served in the infantry. After a few short months he was transferred to a new tank destroyer unit in Texas. Thomas was soon selected for Officer Candidate School and sent to a training program for Black officers in Colorado. In 1943, Charles Thomas was commissioned a Second Lieutenant then assigned to and named commander of the 614th Tank Destroyer battalion. In August 1944, Thomas’s unit was deployed to England. Two months later, they landed at Utah Beach in Normandy and later joined General George C. Patton’s army near Metz, France.

On December 14, 1944, Lieutenant Thomas voluntarily led a platoon from Company C in an effort to as capture the French village of Climbach. As Lieutenant Thomas approached the village to the southeast, the M-20 armored Scout Car he was in was hit with German shell and small arms fire. Despite being wounded in the initial attack, he exited the disabled scout car and helped his crew escape. In their escape, Lieutenant Thomas and his crew received intense enemy fire, from which Thomas received more injuries including multiple gunshot wounds to the chest, legs, and left arm. When the soldiers reached limited safety, Thomas called his platoon commander to inform him of the enemy gun placements. Despite the risks, Thomas stayed in the area and refused to be evacuated until his junior officer thoroughly understood the situation and directions for winning the skirmish. After Lieutenant Thomas was evacuated the junior officer continued the fight for four hours. Finally, the German army withdrew and Climbach fell to Allied forces.

The bravery displayed during the battle elevated Thomas and his unit’s status with well-deserved commendations and citations. For their bravery, the unit commanded by Thomas became the first Black combat unit to receive the Distinguished Unit Citation. On February 20, 1945, Thomas received the Distinguished Service Cross for his leadership and diligence.

In response to a study conducted to determine racial disparity in Medal of Honor recipients, Thomas was recommended to receive one of the Army’s highest service awards. 1997, President Bill Clinton awarded the Medal posthumously for Thomas’s heroic actions during World War II.

After military service, Thomas worked as a missile technician at Selfridge Air Force Base in Michigan and later as a computer programmer for the Internal Revenue Service, Charles L. Thomas passed away from cancer on February 15, 1980 at the age of 60. Today he is remembered as one of seven African American’s who served in World War II receiving the Medal of Honor.