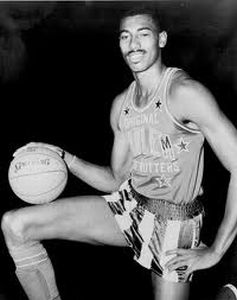 Wilton Norman Chamberlain was an African American basketball player who played in the National Basketball Association (NBA) for the Philadelphia/San Francisco Warriors, the Philadelphia 76ers, and the Los Angeles Lakers.  Chamberlain is known as one of the greatest basketball players of all time, being selected 13 times to the NBA All Star team (1960-1969, 1971-1973) and leading his team to two NBA Final Championships (1967, 1972).

Wilton Chamberlain, known as Wilt, was born on August 21, 1936 in Philadelphia, Pennsylvania to William and Olivia Chamberlain, one of nine children. His father, William, worked in a local publishing company, while his mother, Olivia, worked as a gardener and maid.  Wilt attended Overbrook High School in Philadelphia where he played on the varsity basketball team for three years.  In his sophomore year, Chamberlain led Overbrook High School to a perfect 19-0 record, winning the city championship.  In his senior season, he continued his success by scoring 74, 78, and 90 points in three consecutive games, leading his team to a second straight city championship.  While in high school, Chamberlain scored 2,252 points, breaking the all time high school scoring record, and averaging 37.4 points per game.  Chamberlain was recruited by over 200 universities to play basketball, but he chose the University of Kansas, primarily because of hall of fame coach Phog Allen.

When he arrived in 1955, Chamberlain was surprised to see racial segregation in Lawrence, Kansas.  Chamberlain ignored the segregation by eating in formerly all-white restaurants and going places where African Americans were not allowed.   His presence in the city, coupled with his star basketball status, ultimately led some businesses to change their policies about black patronage.

In his first college game, Chamberlain scored 52 points, and in his first season he led the Jayhawks to the NCAA National Championship game, where they lost to the University of North Carolina in double overtime.  Chamberlain played one more season before leaving college to play professionally.  However, he was unable to enter the NBA draft because he left college early. Instead, he toured with the Harlem Globetrotters for a year (1958-1959).

In 1959, Chamberlain was picked up by the Philadelphia Warriors and made an immediate impact on the league by receiving the Rookie of the Year and Most Valuable Player (MVP) awards.  Chamberlain was only the second rookie to be named MVP.  He led the NBA in scoring for six straight seasons, averaging 40-to-50 points per game.  On March 2, 1962, he became the only player in the history of basketball to score 100 points in a single game.

Chamberlain finally won his first NBA championship in 1967 when he was traded to the Philadelphia 76ers.  He won a second NBA championship with the Los Angeles Lakers in 1972.  After 14 seasons in the NBA, Chamberlain was the all-time leader in points scored (31,419) and rebounds (23,924). He held more than 40 league records.

Wilt Chamberlain died in his home in Bel Air, California of congestive heart failure, on October 12, 1999.